Researchers are using 3D printing to create prosthetic eyes that are more realistic and easier to produce than the traditional kind — and British engineer Steve Verze is thrilled to be the first person in the world to receive a 3D-printed prosthetic eye.

“I’ve been waiting for this for pretty much my whole life,” he told On Demand News.

Why it matters: About .1% of the population is missing one or both of their eyes — some people were born without them, while others had them surgically removed due to disease, injury, or some other trauma.

The loss of an eye doesn’t just affect how a person sees the world, either — if they believe it causes the world to see them differently, it can also negatively impact their self-confidence, mental health, and quality of life.

The challenge: A prosthetic eye won’t help a person see, but it can help them overcome the psychological impact of their loss, particularly if they feel that other people can’t tell they have a prosthetic — but often that isn’t the case.

“I’ve needed a prosthetic since I was 20, and I’ve always felt self-conscious about it,” Verze, who is missing one eye, said. “When I leave my home I often take a second glance in the mirror, and I’ve not liked what I’ve seen.”

What’s new: Traditionally, prosthetic eyes are created and hand-painted by experts called ocularists using images of a patient’s existing eye as a model. That means their level of realism is dependent upon the skill of the prosthetic’s creator.

Verze’s 3D-printed prosthetic eye was created from digital scans of his biological eye, which resulted in a prosthesis with a highly realistic appearance.

Beyond looks: The benefits of a 3D-printed prosthetic eye aren’t limited to better aesthetics. Before the hand-painting process even begins, a patient has to have a mold of their eye socket created — this process is so invasive, children are typically put under general anesthesia for it.

Instead of creating a mold of Verze’s eye socket, a team led by researchers from University College London and Moorfields Eye Hospital scanned it, getting all the data they needed non-invasively and in just 2.4 seconds.

They then printed the eye in about 2.5 hours, after which it was sent to an ocularist for final polishing and fitting — the whole process of creating the 3D-printed prosthetic eye took just two to three weeks compared to the standard six.

The next steps: The researchers are now launching a clinical trial to test the effectiveness of their 3D-printed prosthetic eyes.

A prosthetic eye can help a person overcome the psychological impact of their loss.

“We hope our forthcoming clinical trial will provide us with robust evidence about the value of this new technology, showing what a difference it makes for patients,” principal investigator Mandeep Sagoo said. “It clearly has the potential to reduce waiting lists.”

The big picture: Verze’s prosthetic eye is just one example of how 3D printing is impacting healthcare — the tech has also been used to create prosthetic arms, replacement eye sockets, surgical models of organs, and more.

In the future, researchers hope to be able to use 3D printing to create complex organs, such as hearts and lungs, that are perfect biological matches for people in need of transplants — potentially saving countless lives in the process. 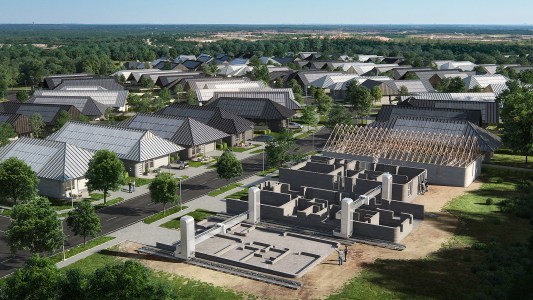 Startup ICON is building the world’s largest community of 3D-printed houses — a move that could help bring the homes to the mainstream.