“I like to think of pathogens as like a dartboard,” says Joshua Blight, looking fittingly fashionable for a video call from the UK capital, where he is sitting in Imperial College London. “And your vaccine is the dart, right?”

Sometimes, you take a shot at the disease dartboard and nail it. But what if the dartboard is moving? Hard to find its mark then.

It’s an issue the public is now confronting as new COVID strains emerge, some with mutations that may reduce the efficacy of our vaccines.

“You’ve got world leaders in pharmaceutical companies … going, ‘oh no, do our vaccines work?’

Most of the vaccines are using antigens (a protein that creates antibodies) that target the coronavirus’s infamous spike protein. If a mutation changes the virus’s spike, it could dramatically lower the efficacy of the vaccine.

Some viruses mutate so quickly, they’re currently impossible to vaccinate against — HIV, for instance.

Blight’s solution is to create a different kind of antigen. Using an AI engine he built as a grad student at Oxford’s Jenner Institute, he began creating “epitope-focused antigens.”

Instead of picking one protein, like the spike protein, these antigens combine pieces of different proteins, including some that are artificial — invented by the AI. The goal is to construct an antigen that doesn’t exist in nature, getting out ahead of new variants and nailing tricky moving targets, like the hydra-headed HIV.

To create a better chance for a bullseye.

“We’re going ‘where do the pathogens start?’” Blight says. “Where is it now? And where is it going in the future?’”

Evolution is the enemy when it comes to immunity. It is the reason why the flu vaccine gets changed up each year, and why it sometimes doesn’t work very well. Influenza is a shifty thing, and scientists have to take an educated guess at how flu’s antigens are going to change each year.

What Blight is hoping to do through his startup baseimmune, which he co-founded, is create vaccine antigens with “plasticity.” These antigens would be capable of producing an immune response against a broad selection of virus strains. Or they could be designed to hit multiple targets in a single, rapidly mutating virus.

baseimmune uses AI to combine real and artificial protein segments, called epitopes, which are what antibodies latch on to.

“There are critical pieces to these sections of proteins that vary,” says Jim Kublin, executive director of the HIV Vaccine Trials Network at Seattle research nonprofit Fred Hutch, who is not associated with baseimmune.

These variations are special because they don’t impact the fitness of the virus — its ability to hijack, replicate, and repeat. By looking at hundreds of different strains of a virus, you can identify these variable spots, Kublin says.

By stringing these different epitopes together, your vaccine could create immune cells and antibodies that will work against the whole spectrum.

“They’re designed to optimally cover diversity, in terms of how the immune cells see the virus,” says Bette Korber, a theoretical biologist at Los Alamos National Laboratory and a pioneer in HIV vaccines. Her original design, known as a mosaic antigen, was developed to try to combat HIV.

baseimmune’s approach is similar, but instead of just looking at variants that already exist, they use an AI, dubbed the “plasticity platform,” to construct artificial proteins that will work against mutations that haven’t happened, but might.

While still studying for his Ph.D Blight used the plasticity platform to develop new antigens for HPV and chikungunya, a mosquito-borne virus. (That HPV vaccine has since been licensed from Oxford by Vaccitech, a different company that grew out of the Jenner Institute.)

Evolution is the enemy when it comes to immunity.

Since then, Blight’s platform has gotten some major upgrades, and it’s churning out new vaccine candidates. baseimmune’s pipeline includes African swine fever virus, SARS-CoV-2, malaria, and an “undisclosed” vaccine that I couldn’t get him to tell me about.

The second generation platform/engine “can deal with far more complex pathogens with more genes and at higher resolution.”

Since the pandemic started, a ton of futuristic new vaccine technology has taken off— mRNA and viral vectors, nanoparticles and immune boosters made from tree bark.

But while delivery platforms — the vaccine’s “hardware,” to use an imperfect analogy — and adjuvants that boost your immune response have been accelerating, Blight says antigens, the “software,” have been standing comparatively still.

“The adjuvants, the delivery vehicles, they’ve had so much investment and they’re so far ahead,” Blight says. “In my opinion, I feel antigen design has changed very little,” since moving away from using weakened or killed entire viruses to pieces of them.

Kublin agrees. Part of our quick success against SARS-CoV-2 was that the antigen was obvious; the spike protein plays such an important role in entering our cells. The groundwork had also been laid while working on vaccines for MERS, another, even more vicious coronavirus, Kublin says.

Killers like tuberculosis or malaria are so much larger and more complex than the coronavirus, however — they can have over 4,000 genes, compared to just 15 genes in SARS-CoV-2. TB’s waxy surface and malaria’s “tremendous diversity”  make it “hard to know what to even pick for a novel antigen,” Kublin says.

Synthetic, AI-created antigens could be exactly the software upgrade we need. With computer analytics that can predict the most likely immune-evading variants, we may be able to “expand the immune response from one season to the next,” Kublin says. “And potentially from one pandemic to the next.”

If a new coronavirus — let’s call it SARS-CoV-3 — emerges and begins infecting people, next time, we could have already developed, tested, and manufactured an antigen that takes aim at multiple spots common to all of the coronaviruses.

The people most at-risk gain a degree of protection faster; healthcare systems do not collapse and life doesn’t have to shut down, with all the collateral damage that entails.

And we stay just ahead of viral evolution.

Editor’s note: This article was edited on 7/29/21 to clarify that Vaccitech licensed the HPV vaccine candidate from Oxford. 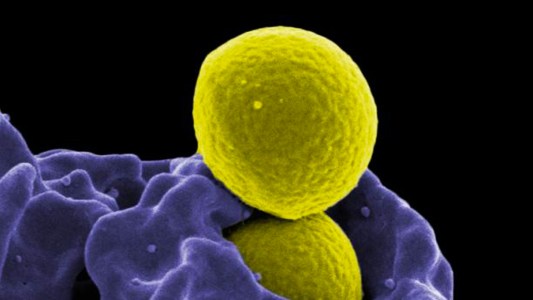