A gene-laced topical gel can heal the wounds of children with “butterfly disease” — a painful, potentially deadly disorder that makes the skin so fragile, even touching it can cause tears to form.

Butterfly disease: Our skin consists of multiple layers. The one exposed to the world is called the “epidermis,” and it’s bound to an inner layer, called the “dermis,” by proteins.

But genetic mutations can prevent these layers from binding properly, causing a rare disease called “epidermolysis bullosa” (EB). As a result, the skin is incredibly fragile.

This has earned EB the nickname “butterfly disease” because people with it are said to have skin as fragile as butterflies’ wings.

As a result, the skin is susceptible to blistering, persistent infections, and cancer, and many of those afflicted will die in infancy or early adulthood.

The challenge: There is no proven cure for butterfly disease, and treatment usually consists of managing open wounds and avoiding other skin damage.

Some experimental EB treatments involving skin grafts and stem cells have shown promise, but they’re complicated and must be administered in a hospital under anesthesia.

The gene therapy delivers working copies of the gene right to the site of a wound.

The gel is a kind of gene therapy, which delivers working copies of the gene right to the site of a wound, allowing the skin to hold together as it heals.

The trial: For a recent phase 1/2 trial involving nine patients, including three children, the gel was sprinkled on a wound on each participant every 1 to 3 days for 25 days. A placebo gel was applied to another wound on each patient with the same frequency.

Skin biopsies from seven patients revealed that production of collagen VII began as soon as nine days after the first treatment. In one case, it continued for almost 100 days.

Within three months of the treatment ending, 7 of the 9 treated wounds had healed completely and stayed healed for several months. A large 10-year-old wound spread across the side of one patient’s body healed 70%.

The one wound that hadn’t responded to the topical gel — a foot wound the participant had had for five years — healed after a second treatment round and stayed healed for eight months.

Wounds that received the placebo healed and reopened at variable rates.

“The wounds heal quickly but, even more importantly, they stay closed,” said senior author Peter Marinkovich. “The therapy strengthens the skin and breaks the painful and destructive cycle of wound opening and closing that patients with epidermolysis bullosa experience.”

Help from herpes: Almost all gene therapies use modified viruses, because viruses are good at infiltrating cells and getting them to make proteins.

But for the same reason, most virus-based therapies can only be used once. Once our immune system has encountered a virus, it learns to recognize it and will neutralize the virus if it ever shows up again.

“We saw no problems with repeated administration of the gel.”

If a gene therapy permanently cures a disease in one shot, you don’t need to worry about that. But because our skin cells are replaced every few weeks, treating wounds caused by butterfly disease once isn’t enough to make a long-lasting impact on a patient’s life.

To get around this, the Stanford team inserted two intact copies of the broken collagen gene into a herpes simplex virus that was modified so that it couldn’t replicate.

Unlike most viruses, herpes is really good at hiding from our immune system. That’s part of why a herpes infection never goes away, and it also makes herpes uniquely useful for gene therapy, because you can use it multiple times without the immune system learning to shut it down.

Looking ahead: The Stanford team has already completed a phase 3 trial of its topical gel. Once it publishes those results, it plans to submit them to the FDA in the hope of getting the gene therapy approved

“We saw no problems with repeated administration of the gel, and the patients and their families were very enthusiastic about the results,” Marinkovich said. “I’m excited that, if approved for clinical use by the [FDA], we will be able to reach many more patients with this devastating disease.” 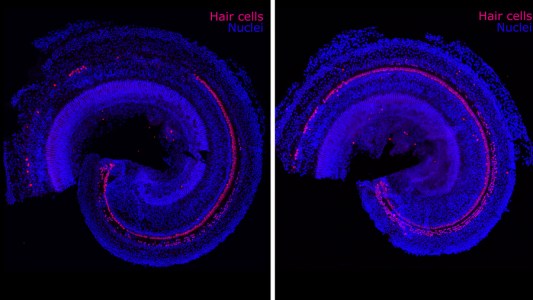