An early, accurate cancer diagnosis can dramatically improve a patient’s outcome, but the tests used to diagnose some cancers are invasive at best and downright awful at worst.

Prostate cancer is one of the most common cancers in men, with more than 1.2 million new cases every year. Doctors usually screen for it by looking at the levels of a protein called prostate-specific antigen (PSA) in a patient’s blood.

However, the PSA test isn’t very accurate (70% of the people it flags as having prostate cancer don’t), so people with high levels of PSA in their blood have to undergo a biopsy to confirm the diagnosis — an invasive procedure that can lead to rectal bleeding, difficulty urinating, and other unpleasant side effects.

Now, researchers at the Korea Institute of Science and Technology (KIST) have developed an AI that can make a nearly 100% accurate prostate cancer diagnosis from a urine sample — and it may work for other types of cancers, too.

Doctors sometimes use urine tests to determine a person’s risk of prostate cancer. However, they can’t use the tests to make a cancer diagnosis outright because urine doesn’t contain high enough concentrations of any single cancer biomarker, such as PSA.

Instead of looking at a single biomarker, the KIST team developed an ultra-sensitive sensor that can detect even small amounts of four different markers of prostate cancer.

For their study, the researchers collected urine samples from 51 Korean men. Of those participants, 25 had prostate cancer, and 26 did not. The 25 who had cancer contributed two urine samples (one before and one after a rectal exam, which can affect the test results).

That left the researchers with a total of 76 urine samples.

Using 53 of those samples, the researchers trained two different AIs to look for patterns in the four biomarkers that would indicate that a person has prostate cancer.

Next, they tested the AIs on the remaining 23 urine samples.

One of the AIs was able to correctly categorize every sample it tested, accurately predicting whether it was from a person with prostate cancer or one without. The other AI produced one false positive, flagging a sample from a healthy person as having prostate cancer.

The researchers believe their smart biosensor could be adapted to allow doctors to diagnose other types of cancers through noninvasive urine tests, too.

“For patients who need surgery and/or treatments, cancer will be diagnosed with high accuracy by utilizing urine to minimize unnecessary biopsy and treatments, which can dramatically reduce medical costs and medical staff’s fatigue,” researcher Gab Jeong said in a press release.

This isn’t the first time AI has proven itself to be a valuable tool in healthcare.

In 2019, researchers at MIT unveiled an AI that analyzes patient mammograms for early signs of breast cancer that a doctor might miss — it predicted which patients were at the highest risk of developing the disease within five years with 31% accuracy, compared to the 18% accuracy of traditional prediction methods.

Then, in 2020, a team from Boston University debuted an AI that was better than the average expert neurologist at making an Alzheimer’s diagnosis based on MRI scans and other patient data.

One of the AIs was able to correctly categorize every sample it tested.

Like the new tool for prostate cancer diagnosis, the researchers behind the Alzheimer’s study also noted their tool’s potential for helping doctors diagnose other medical conditions.

“This can be easily adaptable to process other medical-imaging data, such as CT scans and X-rays,” researcher Vijaya Kolachalama said in a news release. “It can also be extended to analyze images from other organs in the body and develop predictive models to diagnose other diseases.”

“If computer models can detect the disease accurately,” he added, “lives can be saved, cost burden will be lowered, and care will be provided in a timely fashion.” 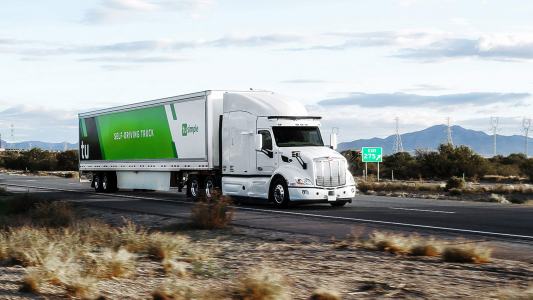 Self-driving cars get all the love, but autonomous trucks are already hitting the road, with a “driver-out” demonstration scheduled for 2021.

AI
Autonomous trucks are taking to the highways
By B. David Zarley
Subscribe to Freethink for more great stories
Subscription Center
Sections
Video
Freethink
Subscribe
We focus on solutions: the smartest people, the biggest ideas, and the most ground breaking technology shaping our future.
Subscribe