A UK teen is the first in the world to receive a “base-edited” cell therapy — and the treatment sent her blood cancer into remission after all other options failed.

The therapy: CAR T-cell therapy is a newer form of blood cancer treatment in which T-cells — a type of white blood cell — are removed from a patient and reengineered to display proteins called chimeric antigen receptors (CARs), which are designed to recognize cancer cells.

These engineered T-cells are multiplied in the lab until they number in the millions. When the cells are then infused back into the patient, the CARs bind to proteins on the surface of cancer cells, helping to identify and destroy the cancer.

The patient: In May 2021, Alyssa, a 13-year-old from Leicester, England, was diagnosed with an aggressive form of blood cancer called “T-cell acute lymphoblastic leukemia (T-ALL),” which affects the stem cells in bone marrow that become T-cells.

She was treated with chemotherapy to kill the cancerous T-cells and a bone marrow transplant to replace her diseased stem cells with healthy ones, but she never went into complete remission.

Traditional CAR T-cell therapy wasn’t an option for her, either — because the CAR T-cells would need to be engineered to find and attack other T-cells, they’d simply wipe each other out in the lab before doctors would be able to manufacture enough for an infusion.

The innovation: In May 2022, Alyssa became the first patient in a small trial testing a new kind of CAR T-cell therapy developed by researchers at University College London (UCL) and Great Ormond Street Hospital for Children (GOSH).

These CAR T-cells were engineered using “base editing,” a technique that allows researchers to change just one letter in the DNA code. Because this approach doesn’t break the DNA strand, the way that CRISPR does, it allows for more edits with less risk of unwanted effects.

To create Alyssa’s therapy, the researchers made several edits to donated T-cells, including one that removed a “flag” that identifies them as T-cells — this made it so the engineered cells wouldn’t attack each other while they were being grown in the lab.

“The doctors have said the first six months are the most important,” said Kiona, Alyssa’s mother. “[W]e don’t want to get too cavalier, but we kept thinking ‘If they can just get rid of it, just once, she’ll be ok.’ And maybe we’ll be right.”

Looking ahead: Alyssa’s doctors plan to monitor her for several months to confirm the efficacy of the treatment, but even if she stays in remission, the therapy will need to prove itself in many more people before it could be approved for widespread use.

The UK team is now moving forward with their clinical trial, which they expect to include a total of 10 children with T-cell leukemia that hasn’t responded to conventional treatments.

“I’m just so grateful that I’m here now,” Alyssa told BBC News. “It’s crazy. It’s just amazing I’ve been able to have this opportunity. I’m very thankful for it, and it’s going to help other children, as well, in the future.” 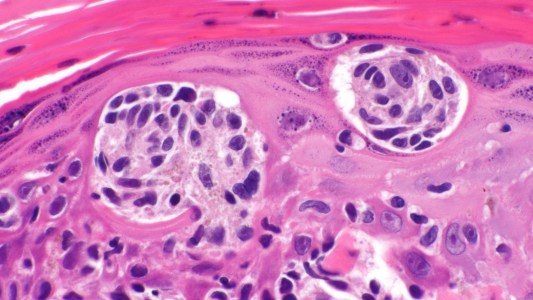