The first time I reached past the sheer horror of the concept of death and wondered what the experience of dying may be like, I was about 15. I had just discovered gruesome aspects of the French revolution and how heads were neatly cut off the body by a Guillotine.

Words I remember to this day were the last of Georges Danton on April 5, 1794, who allegedly said to his executioner: “Show my head to the people, it is worth seeing.” Years later, having become a cognitive neuroscientist, I started wondering to what extent a brain suddenly separated from the body could still perceive its environment and perhaps think.

Danton wanted his head to be shown, but could he see or hear the people? Was he conscious, even for a brief moment? How did his brain shut down?

On June 14, 2021, I was violently reminded of these questions. I set off to Marseille, France, having been summoned to Avignon by my mother because my brother was in a critical state, a few days after being suddenly diagnosed with terminal lung cancer. But when I landed, I was told my brother had passed away four hours ago. An hour later, I found him perfectly still and beautiful, his head slightly turned to the side as if he was in a deep state of sleep. Only he was not breathing anymore and he was cold to the touch.

No matter how much I refused to believe it on that day, and during the several months that followed, my brother’s extraordinarily bright and creative mind had gone, vaporised, only to remain palpable in the artworks he left behind. Yet, in the last moment I was given to spend with his lifeless body in a hospital room, I felt the urge to speak to him.

And I did, despite 25 years of studying the human brain and knowing perfectly well that about six minutes after the heart stops, and the blood supply to the brain is interrupted, the brain essentially dies. Then, deterioration reaches a point of no return and core consciousness – our ability to feel that we are here and now, and to recognise that thoughts we have are own own – is lost. Could there be anything of my beloved brother’s mind left to hear my voice and generate thoughts, five hours after he had passed away?

Experiments have been conducted in an attempt to better understand reports from people who have had a near death experience. Such an event has been associated with out-of-body experiences, a sense profound bliss, a calling, a seeing of a light shining above, but also profound bursts of anxiety or complete emptiness and silence. One key limitation of studies looking into such experiences is that they focus too much of the nature of the experiences themselves and often overlook the context preceding them.

Some people, having undergone anaesthesia while in good shape or having been involved in a sudden accident leading to instant loss of consciousness have little ground to experience deep anxiety as their brain commences to shut down. On the contrary, someone who has a protracted history of a serious illness might be more likely to get a rough ride.

It isn’t easy to get permissions to study what actually goes on in the brain during our last moments of life. But a recent paper examined electrical brain activity in an 87-year-old man who had suffered a head injury in a fall, as he passed away following a series of epileptic seizures and cardiac arrest. While this was the first publication of such data collected during the transition from life to death, the paper is highly speculative when it comes to possible “experiences of the mind” that accompany the transition to death.

The researchers discovered that some brain waves, called alpha and gamma, changed pattern even after blood had stopped flowing to the brain. “Given that cross-coupling between alpha and gamma activity is involved in cognitive processes and memory recall in healthy subjects, it is intriguing to speculate that such activity could support a last ‘recall of life’ that may take place in the near-death state,” they write.

However, such coupling is not uncommon in the healthy brain – and does not necessarily mean that life is flashing before our eyes. What’s more, the study did not answer my basic question: how long does it take after the cessation of oxygen supply to the brain for the essential neural activity to disappear? The study only reported on brain activity recorded over a period of about 15 minutes, including a few minutes after death.

In rats, experiments have established that after a few seconds, consciousness is lost. And after 40 seconds, the great majority of neural activity has disappeared. Some studies have also shown that this brain shutdown is accompanied by a release of serotonin, a chemical associated with arousal and feelings of happiness.

But what about us? If humans can be resuscitated after six, seven, eight or even ten minutes in extreme cases, it could theoretically be hours before their brain shuts down completely.

I have come across a number of theories trying to explain why life would be flashing before someone’s eyes as the brain prepares to die. Maybe it is a completely artificial effect associated with the sudden surge of neural activity as the brain begins to shut down. Maybe it is a last resort, defence mechanism of the body trying to overcome imminent death. Or maybe it is a deeply rooted, genetically programmed reflex, keeping our mind “busy” as clearly the most distressing event of our entire life unfolds.

My hypothesis is somewhat different. Maybe our most essential existential drive is to understand the meaning of our own existence. If so, then, seeing one’s life flashing before one’s eye might be our ultimate attempt – however desperate – to find an answer, necessarily fast-tracked because we are running out of time.

And whether or not we succeed or get the illusion that we did, this must result in absolute mental bliss. I hope that future research in the field, with longer measurements of neural activity after death, perhaps even brain imaging, will provide support for this idea – whether it lasts minutes or hours, for the sake of my brother, and that of all of us. 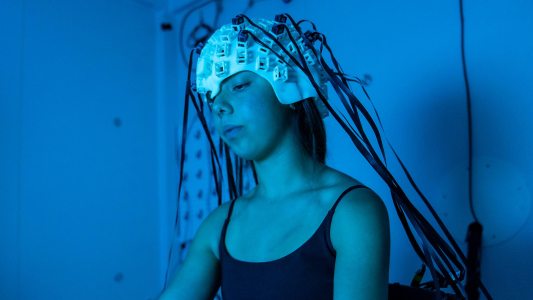 By using quantum physics to measure magnetic fields, researchers are pushing closer to measuring the brain in ways we couldn’t before.

Neuroscience
In a hole in Earth’s magnetic field, neuroscientists are peering into the human brain
By B. David Zarley
Subscribe to Freethink for more great stories
Subscription Center
Sections
Video
Freethink
Subscribe
We focus on solutions: the smartest people, the biggest ideas, and the most ground breaking technology shaping our future.
Subscribe