As a precaution against the coronavirus, most National Football League teams are playing to empty stands this season. However, a few are allowing a limited number of spectators to attend games.

On October 11, the Atlanta Falcons will be one of those teams. After fans leave Mercedes-Benz Stadium that day, a pair of disinfecting drones will swoop in to spray sanitizer on the seats, handrails, and partitions.

This marks the first use of disinfecting drones by any NFL team, but it’s not clear whether the drones will actually help stop the spread of COVID-19 at games — or just make people feel better about attending them.

Each of the disinfecting drones is equipped with nozzles that will spray a non-toxic, EPA-compliant sanitization solution throughout the stadium, according to a Mercedes-Benz Stadium press release.

This will reportedly reduce the amount of time needed to sanitize the stadium by 95%.

“This stadium is incredibly large and as we begin to slowly welcome fans back, these drones allow us to maximize the time between games and private events to thoroughly sanitize,” Jackie Poulakos, manager of building operations at the stadium, said.

North Carolina’s Lucid Drone Technologies developed the disinfecting drones that will soon fly around Mercedes-Benz Stadium specifically in response to the pandemic.

“We are proud to put our technology on the front lines against this virus and provide the general public a much-needed sense of safety,” LDT CEO Andrew Ashur said in June when debuting the drones.

But is a sense of safety — and not actual safety — all the disinfecting drones are really providing?

Another Example of Hygiene Theater

The coronavirus spreads primarily person-to-person through respiratory droplets. It’s incredibly unlikely for someone to catch the virus from a surface, also known as fomite transmission.

“In the entire peer-reviewed COVID-19 literature, I’ve found maybe one truly plausible report, in Singapore, of fomite transmission,” Emanuel Goldman, a microbiology professor at Rutgers New Jersey Medical School, told the Atlantic in July. “And even there, it is not a slam-dunk case.”

Yet many businesses have emphasized their surface sanitization efforts when trying to bring back customers.

The Atlantic dubbed this phenomenon “hygiene theater,” and while disinfecting drones and other surface sanitizers aren’t necessarily a bad idea, emphasizing their deployment might give some a false sense of security — and that might cause them to let down their guard against the real transmission threat: other people.

That means anyone planning to attend an NFL game this season needs to remember to wear a face mask and social distance as much as possible — because it’s not the stadium seats that are likely to infect you with COVID-19, it’s your fellow fans.

Coronavirus
Newly discovered antibody neutralizes all variants of the coronavirus
Using modified mouse models originally designed for HIV, researchers have discovered an antibody that stops all known strains of COVID-19.
Up Next 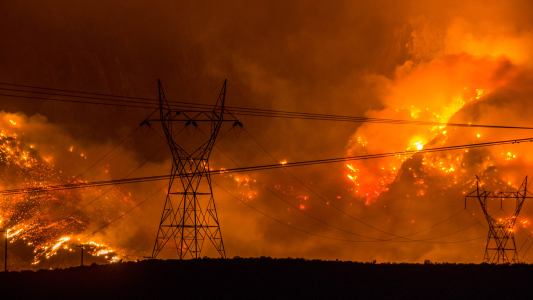 The National Guard has used drones to create forest fire maps since 2017. New AI upgrades could make the maps in minutes, not hours.