Starting with a bacteria used to make cheese, MIT and Harvard researchers are developing a treatment to protect the good bacteria in the gut from antibiotics — helping people battle infections without messing up their microbiome.

The good microbes: Your gastrointestinal tract is home to a unique collection of trillions of bacteria, viruses, and fungi. This is your gut microbiome, and everyone’s is different — exactly which microbes are in your belly depends on your genes, diet, environment, and other factors.

The gut microbiome plays an important role in your health, helping you digest food, produce vitamins, and prevent infections. But if this ecosystem in your GI tract is thrown off — a condition called “dysbiosis” — it can contribute to many health issues, from short-term diarrhea to long-term GI problems.

Lots of medications can cause dysbiosis, including antibiotics. While fighting infections, antibiotics also kill helpful bacteria as collateral damage, including ones that compete with the microbe C. difficile. This may lead to a C. diff infection, which can cause recurring bouts of nausea, fever, severe diarrhea, and even death.

If the balance of microbes in your GI tract is thrown off, it can contribute to many health issues.

In an attempt to prevent dysbiosis, doctors may prescribe supplements that contain beneficial bacteria — probiotics — along with antibiotics, to try to restore the microbiome.

But Andres Cubillos-Ruiz, lead author of the new study, believes they’re not an adequate solution to the problem.

Start with cheese bacteria: Cubillos-Ruiz and his colleagues have now created a bacteria that appears to protect the gut microbiome from dysbiosis without reducing the efficacy of antibiotics.

Mice given this bacteria along with an antibiotic showed higher levels of microbial diversity in their microbiome (a potential sign of a healthy gut) than mice given antibiotics alone. Mice that got the bacteria treatment all ended up with lower levels of C. diff in their guts, too.

“Standard probiotics cannot compare to the diversity that the native microbes have.”

The level of antibiotics in the bloodstreams of the mice, meanwhile, were the same regardless of whether they got the bacteria, suggesting that it wouldn’t interfere with the meds’ ability to fight infections outside the gut.

The bacteria doesn’t affect antibiotic levels in the blood because most oral antibiotics are absorbed in the stomach, above the intestines where most gut bacteria live.

“This is a strong demonstration that this approach can protect the gut microbiota, while preserving the efficacy of the antibiotic,” said Cubillos-Ruiz.

Preempting evolution: Introducing a bacteria that breaks down antibiotics to the gut is risky.

If a bacteria in the gut “learns” that secreting the beta-lactamase enzyme helps it survive antibiotics, it might swipe the gene that makes that enzyme from the engineered bacteria for itself. That would make it harder to kill the bacteria if we ever need to in the future, increasing the problem of antibiotic resistance.

To prevent that, the researchers split the gene that makes the enzyme into two pieces and placed the segments on different pieces of DNA in their engineered bacteria. Another microbe would need to adopt both of these segments independently to produce the enzyme, which is far less likely.

Looking ahead: The researchers are now working to develop their experimental treatment into something that could be tested in people for whom antibiotic-caused dysbiosis is likely to lead to acute diseases.

If human trials go well, their long-term goal is to see the engineered bacteria administered to anyone taking antibiotics for infections outside the gut.

“If the antibiotic action is not needed in the gut, then you need to protect the microbiota … No previous intervention could offer this level of protection,” said Cubillos-Ruiz. 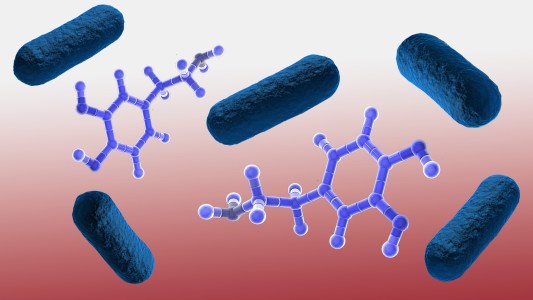 L-DOPA is a miraculous Parkinson’s drug with terrible side effects. Researchers have created drug-producing bacteria that may help.