Biotech company Moderna is developing a herpes vaccine — and if it works as hoped, it’ll be the first shot to protect against the most common sexually transmitted infection (STI) in the world.

The infection: Scientists have identified more than 100 herpesviruses, and nine of them infect humans, including HSV-1 (the virus that causes cold sores on the mouth) and HSV-2 (the one that causes sores on the genitals).

HSV-2 is spread through sexual contact, and once a person is infected, the virus will remain in their body forever. In addition to the periodic outbreaks of painful sores, carriers also have to deal with the stigma of being infected with herpes.

“HSV-2 affects mental and emotional health, too,” Harvey M. Friedman, an HSV researcher at the University of Pennsylvania, told Penn News in 2021. “Those with the disease have to worry about passing it to others and engaging in sexual relationships.”

A herpes vaccine could not only prevent new HSV-2 infections, but also help in the battle against HIV.

Nearly half a billion people are infected with HSV-2, making it the most common STI in the world. People with HSV-2 are also three times more likely to contract HIV if exposed to that virus.

That means a herpes vaccine could not only prevent an estimated 350,000 new HSV-2 infections every year, in the U.S. alone, but also help in the battle against HIV.

So why don’t we already have a vaccine against herpes? Because decades of previous efforts have all failed in human trials.

The challenge: The goal of a vaccine is to trigger an immune response to a virus without actually infecting a person — that way, a person’s body will be trained to spot and attack the real virus if it ever shows up.

We knew the coronavirus’ spike protein would trigger an immune response, for example, so that’s what developers used as the “trigger” in their vaccines.

But HSV-2 can infect a person and then evade the immune system for years in ways we don’t fully understand. That makes it hard to identify the best part of the virus to train the immune system.

Alternatively, researchers can use a weakened or “attenuated” version of the entire virus as a vaccine. This increases the chance of triggering a good immune response, and it’s how we’ve created many effective vaccines in the past.

Unfortunately, because the herpes virus can hide inside nerve cells for life, working with even a weakened live virus is risky.

“It’s great from an immunity standpoint, but it’s not as safe,” Charles Rinaldo, a professor of infectious diseases and microbiology at the University of Pittsburgh, told NBC News. “It can create problems if it enters the nervous system.”

Whether researchers use a whole herpes virus or just part of it, it takes a long time to grow enough to test a vaccine. And, as with any vaccine trial, researchers then have to wait for enough people in the vaccine and placebo groups to contract the virus to determine their shot’s efficacy.

“With genital herpes, you might have to follow 1,000 people for a year, and there might be 20 to 40 people who will be infected,” Friedman, the Penn researcher, told Relias Media. “With COVID, it was hundreds who might get infected.”

No one has tested an mRNA-based herpes vaccine in people yet.

A small number of infections means it takes a lot longer to get a clear result.

As if that’s not enough, herpes vaccine developers can’t just wait for symptoms to appear in people — because herpes can remain dormant for years, they have to regularly test participants, which seriously increases trial costs.

Moderna’s idea: An mRNA vaccine doesn’t use any part of a virus — instead, it delivers genetic instructions to the body that teach it how to make a part of a target virus. That then triggers the immune system, prepping it to attack if it ever sees it on a real virus.

This is a lot faster and easier to scale than growing viruses, and a single mRNA vaccine can deliver instructions to make multiple parts of a virus — a herpes vaccine that Friedman is developing codes for three different HSV-2 proteins.

No one has tested an mRNA-based herpes vaccine in people yet, but candidates that have reached animal trials have been remarkably effective — one protected 100% of mice from infection, and another protected 98% of mice.

Looking ahead: Along with BioNTech, Moderna is the big name in mRNA vaccines, and it’s now adding a HSV-2 vaccine to its development pipeline, as well as a vaccine against varicella-zoster virus (which causes chickenpox and shingles) and a cancer vaccine.

The company expects its herpes vaccine to not only protect against new HSV-2 infections, but also provide some protection against HSV-1.

It’s still too soon to say whether Moderna’s herpes vaccine will be the one to finally make it through human trials. However, CEO Stéphane Bancel told Barron’s it has “a lot of capital” to spend on larger trials and expects to have the shot “​​in the clinic really soon.” 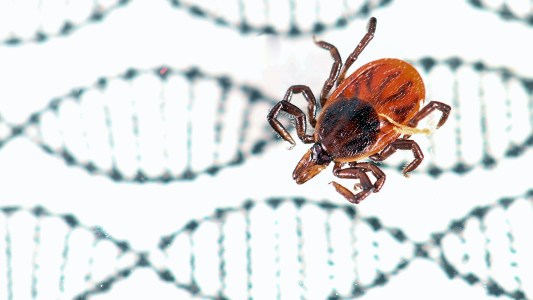 U.S. researchers have overcome a hurdle that was preventing the use of CRISPR to fight tick-borne diseases, such as Lyme disease.

CRISPR
We can now use CRISPR to fight tick-borne diseases
By Kristin Houser
Subscribe to Freethink for more great stories
Subscription Center
Sections
Video
Freethink
Subscribe
We focus on solutions: the smartest people, the biggest ideas, and the most ground breaking technology shaping our future.
Subscribe