Stanford Medicine researchers have developed a new technique that allowed three children to receive kidney transplants without needing to take immunosuppressant drugs for the rest of their lives.

It’s a development that could change the lives of countless people in need of new organs.

“The Holy Grail of transplantation is immune tolerance … This is ground-breaking,” Amit Tevar, surgical director of the Kidney and Pancreas Transplant Program at the University of Pittsburgh Medical Center, who wasn’t involved in the study, told NBC News.

Immunosuppressants leave a transplant recipient at greater risk from infection.

The challenge: For most people, their immune system is a powerful weapon against illness — by detecting and attacking foreign invaders in the body, it can stop everything from common colds to potentially deadly infections.

But for people who need organ transplants, the immune system is an obstacle to a healthy life — if they don’t take immunosuppressant drugs, it will identify their new organ as foreign and attack it, too.

These drugs typically have to be taken for the rest of a transplant recipient’s life, and while they do help prevent organ rejection, they can have nasty side effects and leave a person at greater risk from infection.

A two-parter: The three children who received kidney transplants at Stanford have a rare disease called Schimke immuno-osseous dysplasia (SIOD), which affects both their kidney function and their immune systems.

Successfully treating them without immunosuppressants required the Stanford team to perform what it calls a dual immune/solid organ transplant (DISOT) — essentially, they gave each child a new kidney and a new immune system from the same donor.

The donated stem cells were processed using a technique designed to prevent a potentially fatal complication.

First, the kids underwent a grueling regimen of chemotherapy, radiation, and immune-suppressing medications to destroy their own immune systems.

Then they received a stem cell transplant from one of their parents. That gave them a functional immune system — something they previously lacked due to their disease.

Before transplantation, the donated stem cells were processed using a technique developed by lead author Alice Bertaina to prevent graft-versus-host disease (GVHD). That is a potentially fatal complication in which the new immune cells attack the recipient’s body.

The results: One child experienced a mild case of GVHD that was cleared up with medication. Two received immunosuppressants for just 30 days after the kidney transplants. The third stopped taking them even sooner due to short-term side effects.

It’s now been around 2-3 years since the kidney transplants, and all three children are living without any signs of immune disease or organ rejection. They have fully functioning kidneys — with no immunosuppressants required.

“They are doing everything: They go to school, they go on vacation, they are doing sports,” Bertaina said. “They are having completely normal lives.”

Looking ahead: The Stanford team isn’t the first to try transplanting a donor’s immune system along with a new organ, but in past attempts, patients still ended up needing to use immunosuppressants or were at high risk of developing GVHD.

Bertaina’s stem cell processing technique appears to be the key to a successful two-transplant combination, and in May 2022, the FDA approved DISOT to treat patients with a variety of conditions related to kidney disease, including SIOD, cystinosis, and systemic lupus.

“That’s a challenge, but it’s not impossible.”

The Stanford team now plans to trial the protocol in other patients, including children whose bodies have already rejected kidney transplants. They also plan to investigate its use for other types of transplants, including ones where the organs come from deceased donors.

“That’s a challenge, but it’s not impossible,” Bertaina said. “We’ll need three to five years of research to get that working well.” 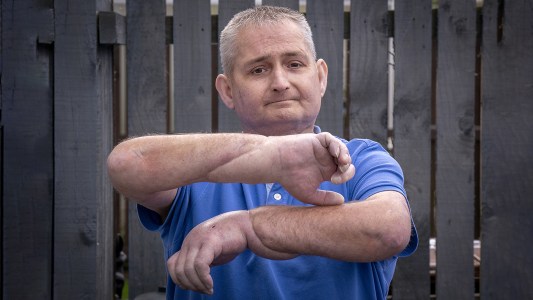