A UK trial is the first in history to transfuse lab-grown blood cells into a person — a huge step toward protecting the lives of people who undergo frequent blood transfusions.

Blood 101: Blood type is determined by the presence or absence of certain antigens — proteins that trigger an immune reaction — on the surface of blood cells.

If a person receives a transfusion that isn’t compatible with their type, their immune system will attack the donated blood cells. This can cause fever, pain, kidney damage, and more. In some cases, the reaction is life-threatening.

While A and B are the most common blood antigens, there are more than 600 others, and it can be difficult for people with rare blood types to find suitable donors. This is a particularly serious problem if they need regular transfusions due to a condition such as sickle cell anemia.

Even if people in need of regular transfusions don’t have trouble finding matching donors, they also have to worry about the iron in all of those donated red blood cells building up in their body and causing organ damage.

What’s new? UK researchers have developed a technique for growing red blood cells in the lab using stem cells extracted from donated blood. On November 7, they announced that they’d transfused small amounts of these cells into healthy volunteers as part of the RESTORE trial.

While lab-grown blood cells have been infused back into the same person who donated the stem cells, this is the first-ever transfusion from a donor to another recipient.

Why it matters: The ability to grow red blood cells from stem cells could one day help people with rare blood types. Doctors could potentially turn a donation from one person with the unusual blood type into enough cells to transfuse into many people many times.

The lab-grown blood cells might last longer in the body, reducing the frequency of transfusions.

Red blood cells typically die after about 120 days. That’s why people with conditions like sickle cell anemia can’t just get one transfusion and be done with it — they need to constantly replace the healthy cells after they die.

While typical blood transfusions contain cells of all ages, all of the lab-grown blood cells are young, which means they might last longer in the body. If that’s true, they could reduce the frequency of transfusions and the chance of an iron overload.

Looking ahead: Two out of the ten people expected to participate in the first trial have each received transfusions of 1 to 2 teaspoons of lab-grown blood cells so far, and both appear healthy and side-effect free, according to the researchers.

Ultimately, all of the volunteers will receive transfusions of traditionally donated red blood cells, too. Because the lab-grown cells are tagged, the researchers will be able to compare their longevity to that of the cells from ordinary donated blood.

Even if the lab-grown blood cells do last longer, future trials will be needed to test whether they are as effective at treating blood disorders.

The researchers say they need to figure out how to scale up their production process, too — a normal transfusion requires about 3 cups’ worth of cells, which is roughly a hundred times more than they’re currently producing for each trial volunteer.

Cost is another concern — a spokesperson for NHS Blood and Transplant, one of the groups spearheading the trial, told CNBC that, while there is currently “no figure” for the procedure, if trials are successful, costs would presumably fall as manufacturing scales up.

“The need for normal blood donations to provide the vast majority of blood will remain,” said Farrukh Shah, the medical director of transfusion for NHS Blood and Transplant. “But the potential for this work to benefit hard-to-transfuse patients is very significant.” 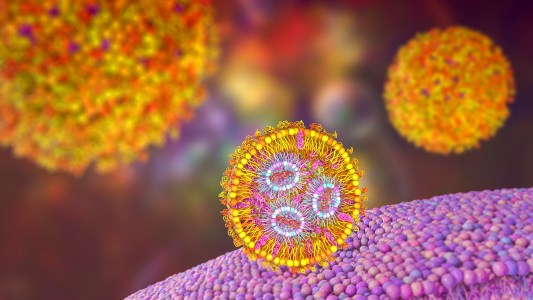 Pfizer and BioNTech’s new mRNA vaccine designed to protect against COVID-19 and the flu has entered human trials.