A trial testing a new CRISPR-based treatment to lower cholesterol has officially kicked off in New Zealand. If it works as well as it did in animal trials, the one-and-done treatment could save countless lives — permanently lowering cholesterol and the risk of a heart attack.

Why it matters: Cholesterol is a waxy material produced by the liver and found in certain foods we eat. It circulates in the blood, and it comes in two varieties: HDL and LDL.

Having a healthy amount of HDL can protect you against disease, but excess LDL is the primary cause of coronary heart disease — a leading cause of death globally.

A quarter of Americans have high cholesterol or are taking statins to keep it down.

Cutting down on certain foods (and eating more healthy foods) can help lower cholesterol levels, but sticking to a strict diet is difficult.

Pills called statins can lower cholesterol, too, but they must be taken once a day and can have intolerable side effects. Newer injectable meds can be taken as infrequently as twice a year, but they’re costly and often not covered by insurance.

According to the CDC, a quarter of Americans (and more than half of those over 65) have high cholesterol or are taking statins to keep it down.

It is designed to permanently deactivate a gene in the liver that controls the production of PCSK9 — a protein that prevents the removal of excess cholesterol from the body.

In monkey trials, it reduced LDL cholesterol levels by 70% in just two weeks and kept them low for at least two years — suggesting that it could effectively cure high cholesterol in people.

How it works: While CRISPR is sometimes used to cut DNA, Verve’s treatment just swaps out a single letter in the PCSK9 gene for another.

This is called “base editing,” and in animal studies, it’s been more efficient and had fewer errors than standard CRISPR. Verve’s trial marks the first time base editing has ever been used in people — one more reason it’s a big deal.

The delivery mechanism for Verve’s treatment to lower cholesterol is also notable.

Instead of taking the traditional approach to gene therapy, using a hollowed-out virus to deliver its CRISPR therapy, the company uses nanoparticles to deliver genetic instructions into cells, just like the ones used to package the mRNA vaccines for COVID-19.

The big picture: Therapies that work in animals often don’t translate to humans, and the permanence of Verve’s treatment means there is no undo button.

However, people who are born with mutations in PCSK9 that lower their cholesterol have a significantly lower risk of heart disease, suggesting the treatment should work in humans.

At least one person has already taken the plunge, receiving a dose in Verve’s trial, which will involve approximately 40 adults with “heterozygous familial hypercholesterolemia” (HeFH), a relatively common genetic disorder that causes dangerously high cholesterol and heart disease.

The trial is only just beginning, but if everything goes as hoped, Verve’s treatment to lower cholesterol could mark CRISPR’s biggest impact on humanity yet.

“If this works and is safe, this is the answer to heart attack — this is the cure,” Verve CEO Sekar Kathiresan told MIT Tech.

Update, 7/25/22, 9:40 a.m. ET: This article was updated to clarify that HeFH is a genetic disorder that causes heart disease. 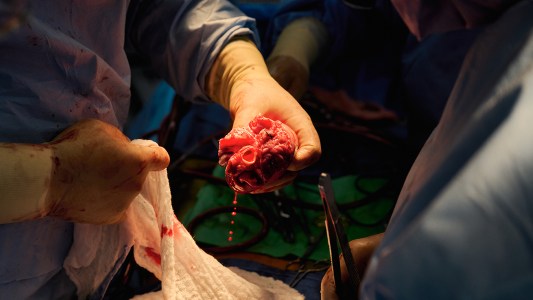