Successfully combating Lyme disease spread may require keeping an eye on the skies. Birds are a natural reservoir for Borrelia burgdorferi (the corkscrew bacteria behind Lyme disease), and they can carry the pathogen long distances, passing it on to ticks, which, in turn, bite and infect people.

Daniel Becker (Indiana University) and Barbara Han (Cary Institute of Ecosystem Studies), who previously created an AI to predict regions of high risk for zoonotic disease, have now developed a machine learning algorithm to predict which bird species should be on our radar as possible feathered progenitors of Lyme disease spread.

Lyme disease is spread to humans via tick bites. These frightful arachnids — relatives to scorpions and, ugh, spiders — pick up the disease from other animals (often deer) whose blood they feed upon.

The disease has a markedly slow progression, and causes a range of ailments from the trademark “bulls-eye” rash to fever, headache, fatigue, and — if left untreated long enough — can even spread to the heart, joints, and nervous system.

Per the CDC, Lyme disease is the most common vector-borne disease in the U.S., and climate change is altering the range of the ticks through which Lyme spreads.

We know birds can carry the bacteria hither and yon; the question is, just what birds should we be watching?

Eyes on the Skies

That’s where Becker and Han come in.

“We know birds can infect ticks with the Lyme bacterium; however, until now, no one has systematically studied the ecological and evolutionary drivers that influence which bird species are most likely to host and spread Borrelia burgdorferi on a global scale,” Becker, the study’s lead author, said in Cary’s release.

“We set out to fill this gap by identifying traits of bird species that are most likely to pass Lyme to feeding ticks.”

To do this, the researchers first scoured published literature for studies that reported Lyme infestation in ticks that feed on birds. The search yielded 91 bird species that can be considered “competent” reservoirs, as they’ve been demonstrated to infect ticks with Lyme disease. The birds in question had a cosmopolitan distribution, the authors report; ranges extended from the Americas to Africa, Asia and Oceania.

A machine learning algorithm then compared the traits of the 91 competent reservoir species with over 4,000 other birds, looking at factors like lifespan, diet, foraging location, body size, reproduction rate, and what age fledgelings leave the nest. Baseline measurements of the avian stress hormone corticosterone were also examined; stress can make animals more susceptible to infection and shedding of pathogens.

This data was combined with geographical data about the bird’s ranges, migration patterns, and their maximum flight elevation.

The resulting model was able to correctly predict Lyme-carrying birds 80% of the time, and flagged 21 new species as potential causes of Lyme disease spread.

Interestingly, birds with low stress hormone levels, that winter and breed in higher latitudes at low elevation, and that are widely distributed were most at risk. Birds on either spectrum of the pace-of-life-cycle — breed early and die young, or breed late and live longer — showed increased chances of Lyme disease spread, as well.

Where the birds eat matters, too; birds that eat seeds or hunt along the ground are more likely to get munched on by a tick.

The study, published in Global Ecology and Biogeography, found that birds known as true thrushes were found to have a “significantly greater likelihood” of infecting ticks with Lyme. (True thrushes include the American robin you’ve no doubt seen flitting about, if you live in North America.)

“These findings remind us that pathogen competence varies tremendously, even among animals of the same family,” Han says — and the ones in your backyard may be more competent than most.

“Machine learning techniques allow us to analyze animal traits and help us predict risky species on a global scale — not only for Lyme, but for other tick-borne and zoonotic diseases that involve multiple host species.”

Climate change is shifting bird’s breeding ranges north, potentially bringing ticks and disease with them, according to the researchers.

If these birds start carrying Lyme bacteria and/or infected ticks to a region where Lyme disease is rare or nonexistent, it may get missed by doctors who aren’t familiar with the symptoms. Identifying where these ticks may be could help improve medical response to not just Lyme but other tick-borne illnesses, Becker says.

“Birds don’t spread Lyme directly to people, but they can carry infected ticks to new locations with no history of Lyme occurrence,” Becker says. “A tick could drop off a bird and into a garden or yard, where it could later bite and infect a person.”

There are preventative measures that can be taken in areas where Lyme disease is endemic — or we have reason to believe it may be.

Quite a few can be done for yourself; covering up, performing tick checks, utilizing repellents, and ensuring your pets stay tick free. On the systematic level, environmental control — like the use of acaricides — could help prevent tick-borne diseases in regions alerted to the risk. 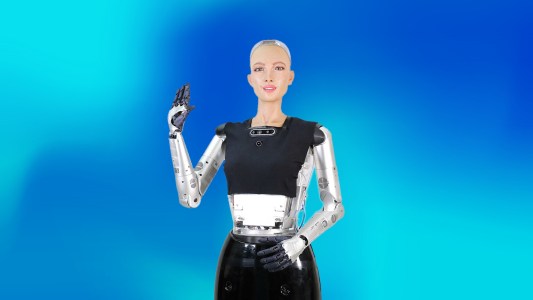 Hanson Robotics is going to begin mass-producing Sophia the robot in 2021, making the social robot available to help combat the pandemic.

Robotics
Sophia the Robot will be mass-produced this year
Subscribe to Freethink for more great stories
Subscription Center
Sections
Video
Freethink
Subscribe
We focus on solutions: the smartest people, the biggest ideas, and the most ground breaking technology shaping our future.
Subscribe