To treat lymphoma in dogs, veterinarians have traditionally relied on chemotherapy drugs first designed for people.

Now, the FDA has approved a medication specifically designed to treat canine cancer — and the new approach to chemo drug development might end up helping humans.

Lymphoma in dogs: Lymphoma is a cancer that starts in the cells and tissues of the lymphatic system. It’s one of the most common cancers in dogs, accounting for up to 24% of all new cases and affecting up to 70,000 pets in the U.S. annually.

Without treatment, the average life expectancy of a dog with lymphoma is one to two months.

“The drug potentially gives dogs and their owners more time together.”

The most common treatment for lymphoma in dogs is chemotherapy. Usually, that involves administering a combination of drugs that were initially designed to treat various cancers in humans.

Only recently have drugmakers started focusing on the development of chemo drugs specifically for use in animals, and now, Tanovea is the first drug approved by the FDA to treat lymphoma in dogs.

How it works: Tanovea is administered intravenously in five doses delivered three weeks apart. A molecule within the drug targets and accumulates in rapidly dividing lymphoma cells.

The molecule then enters the nucleus of the cell and disguises itself as the DNA base guanine. That allows it to interfere with the cell’s ability to divide, after which the lymphoma cells start to die.

The trial: During a clinical study involving 158 dogs, those that received Tanovea lived a median of 61 days longer than dogs that received a placebo. Dogs that fully responded to the drug went a median of 168 days without their cancer getting any worse.

The most common side effects of using Tanovea to treat lymphoma in dogs included diarrhea, decreased appetite, and vomiting.

“This gives veterinarians another important tool to help extend the quality of life for dogs with lymphoma, and potentially give them and their owners more time together,” Steven M. Solomon,  director of the FDA’s Center for Veterinary Medicine, said in a news release.

The big picture: There’s no indication that Tanovea specifically might one day be used to treat people, but researchers are starting to lean on canine cancer studies in pursuit of better treatments for humans.

Because dogs are biologically more similar to humans and also share our environment, their response to treatments is more likely to mirror our own than lab mice. By enrolling their pets in the trials, owners, meanwhile, get the possibility of more time with their animals.

“The role of animals in our lives has been well-known, as therapy, guide, and service dogs,” Rodney Page, professor of medical oncology and director of the Flint Animal Cancer Center, told NBC News in 2019.

“What we’re doing now provides an opportunity for companion animals to serve as supporters of clinical research in a way that will transcend their other functions,” he continued. 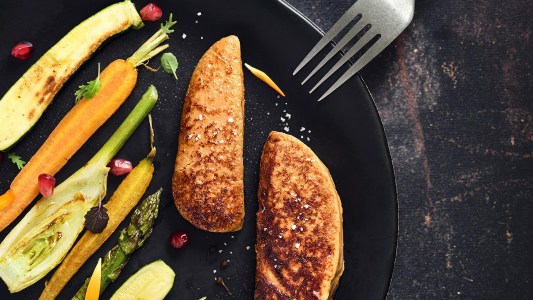 Gourmey is developing lab-grown foie gras, using stem cells to produce the delicacy without subjecting birds to the practice of gavage.