Jeremy, 47, is a political writer in Washington, DC who spends his spare time writing screenplays and producing what he calls “nerd punk rap” music. Jeremy also has autism and has suffered from lifelong side effects including crippling anxiety, social avoidance, and physical pain. But he has found a unique – and natural – way to treat his autism: marijuana.

“Especially for those in the Asperger’s range, anxiety can be crippling,” Jeremy says. “It’s why autistic kids act out and can become loud and violent; they’re usually dealing with an anxiety they can’t control.”

For Jeremy, using marijuana for autism has been surprisingly effective: the drug helps relieve these debilitating emotional issues while also easing secondary physical symptoms that were harming his body and causing chronic pain.

“My anxiety causes a lot of clinching and holding muscles in stressful and eventually painful ways,” he says. “Marijuana reduces both the clinching and the resultant pain.”

Alleviating his physical and emotional pain allows Jeremy to live and work more fully. As a high-functioning professional, using medical marijuana for autism is highly practical: smoke until the symptoms reduce enough to allow him to go ahead with what he was planning to do.

With his successful writing career and multiple side gigs, Jeremy could not be more different from the stereotype of the zoned-out “stoner.”

“The great thing about marijuana,” he adds, “is that you can tell how much to smoke because the effects are quick and obvious. If I’m in pain, the pain lessens. If I have anxiety, it goes away.”

Marijuana’s ability to reduce pain and anxiety allows Jeremy to be more productive in his daily life; it also allows him to stop perseverating on negative thought patterns. “Marijuana is powerful because it restarts various synapses that stop firing,” he says. “This is super powerful for autism because part of the problem is that you get stuck in patterns and routines, because your brain stops seeing the other pathways.”

With his successful writing career and multiple side gigs, Jeremy could not be more different from the stereotype of the zoned-out “stoner.” But can marijuana treatment work for others with autism too?

Autism Spectrum Disorder (ASD) is a cognitive and developmental disorder that covers a range of neurological symptoms from mild to severe. According to the Centers for Disease Control, about one in 59 children in the U.S. has ASD, and the prevalence has risen biannually since 2002.

Since autistic behaviors frequently include rejection of physical and eye contact, a lack of facial expression, and a perceived disinterest in communication – all of which makes it harder to connect with others – autism can lead to social isolation. As there is no “cure,” treatments include behavioral, speech, and coping therapy, together with medication to help control symptoms like depression and inability to focus. However, these treatments do not work for everyone and often result in unwanted side effects.

Using medical marijuana for autism is highly practical: smoke until the symptoms reduce enough to allow the individul to go ahead with what they were planning to do.

With a dearth of effective treatments, there has been a recent push by parents to expand the use of medical marijuana to treat their children’s autism. In 2014, a group of mothers came together to form Mothers Advocating Medical Marijuana for Autism (MAMMA) to advocate for legalized access. The group’s goal is for marijuana to become a legally sanctioned treatment for people with autism nationwide.

AmyLou Fawell, the organization’s co-founder and president, has been advocating for change in her home state of Texas. Fawell, a devout Christian and longtime Republican, has helped add credibility to the marijuana for autism movement in a state known for being conservative. In fact, her organization began at a Bible study for mothers of special-needs kids. After the group viewed CNN medical correspondent Dr. Sanjay Gupta’s pivotal documentary, Weed, it realized that marijuana could help alleviate the symptoms of developmental disorders like autism.

“About half of our (autistic) kids will have self-injurious behaviors, aggressive behaviors, or both,” Fawell says. This includes Fawell’s adult son, Jack, who bites his hands when he is frustrated. Citing a 2006 study where Marinol, a synthetic form of THC, was used to treat children with self-injurious behavior Fawell says, “It significantly reduced the amount of self-injury that (the children) exhibited.”

Israeli Researchers Find a Promising Connection Between Marijuana and Autism

While research on cannabis and autism is still in its early stages, a number of new studies are now in trial. Israel (which legalized medical marijuana in 1992) is leading the way in researching marijuana’s effectiveness in reducing both seizures and behavioral challenges.

In 2019, Israel’s Ben Gurion University of the Negev released a study that shows a promising connection between marijuana and autism. The study followed 188 children with autism, aged 18 and under, for six months as they used cannabis oil for autism symptoms. The oil contained 30% cannabidiol oil (CBD) and 1.5% tetrahydrocannabinol (THC). According to the study, after six months of treatment more than 80% of participants reported “significant or moderate improvement.”

Patients experienced various cognitive improvements. Before the trial, only 3% of patients reported being able to get a good night’s sleep; during treatment, that number climbed to 25%. Concentration also dramatically improved, jumping from zero to 14% of patients being able to concentrate with treatment.

Behavioral side effects of autism, including seizures, restlessness, and rage attacks, were also significantly improved by the marijuana treatment. Nearly 85% of patients had their seizures completely disappear, 91% noticed an improvement in restlessness, and 90% reported a reduction in rage attacks.

Importantly, the study found that marijuana also improved the ability to complete daily tasks. Prior to the study, for example, only 26% of patients were able to dress and shower themselves without help. After treatment, that number jumped to 43%.

When it Comes to Marijuana and Autism, More Access Is Needed

For Jeremy, living with autism is no longer debilitating – but only because he can moderate the negative effects with marijuana. “If your (autism) symptoms don’t overwhelm your brain,” he explains, “you can have the ability to focus on things and process information at a higher level than other people.” This allows him to be extremely productive, both at work and in his side interests. He also notes that, for him, “the interaction of marijuana and autism seems to preclude some of the negative effects others have with marijuana – such as paranoia and hunger.”

For Jeremy, living with autism is no longer debilitating – but only because he can moderate the negative effects with marijuana.

Thanks to the 2014 passage of Initiative 71, which legalized marijuana use in Washington, DC, it’s easy for Jeremy to obtain the treatment he needs, and he feels there is no stigma attached to discussing his treatment with his doctor and friends. But Jeremy – and his access to cannabis for autism – is an exception.

Currently, recreational marijuana is only legal in 11 states and, while medicinal use is available in 33 states, there are still many restrictions that can make it difficult to obtain. Meanwhile, most of the global research on marijuana and autism has focused on children – and practically no work has been done on the effects of marijuana on the millions of adults like Jeremy who live with autism.

That means that AmyLou Fawell will continue to lobby for marijuana access for her adult son in Texas. “With almost 1.5% of the population being diagnosed with autism, that’s a lot of Texans with autism,” she points out. “There is a great need for cannabis to help us.” 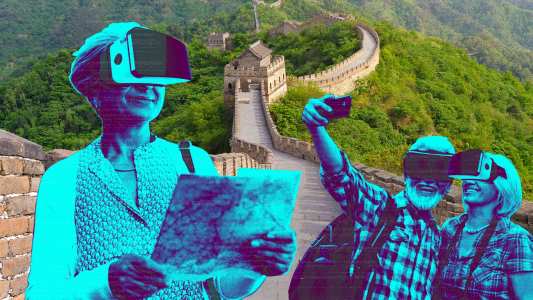 In the U.S., about six million people over the age of 65 experience late life depression. So one organization is providing virtual reality excursions for seniors to help them experience life to the fullest.