The study, spearheaded by researchers at UC San Francisco, found that participants who received MDMA in addition to talk therapy had significant improvement in their symptoms, at almost twice the rate as those in the placebo group (who also received talk therapy).

“This is about as excited as I can get about a clinical trial,” Johns Hopkins neuroscientist Gul Dolen, who wasn’t involved in the study, told Nuwer.

“There is nothing like this in clinical trial results for a neuropsychiatric disease.”

Potential unmet: The study is not the first to demonstrate the potential for using MDMA for PTSD therapy. When used in a clinical setting, and in conjunction with traditional treatments like talk therapy, the drug has shown promising results, especially considering the difficulty of treating PTSD.

Previous research has shown that MDMA-assisted PTSD therapy may also have long-lasting benefits, and could be beneficial when administered in a couples therapy setting as well.

While most famous as a party drug — where it goes by ecstasy or molly — MDMA began its broad use in therapeutic settings, Nuwer explains.

After its invention by Merck pharmacists in 1912, the drug was dusted off over six decades later by Alexander Shulgin, who tried it himself (smart guy!). When he realized it may have mental health applications, he introduced it to psychotherapist Leo Zeff, who in turn introduced it to others. By the ’80s, hundreds of therapists may have administered millions of doses.

But when it left therapists’ offices for warehouse raves, the DEA clamped down, making MDMA a schedule 1 drug — reserved for compounds with “no currently accepted medical use and a high potential for abuse.” Research slowed to a trickle, hampered by federal regulations.

Researchers like Rick Doblin, the founder of research nonprofit the Multidisciplinary Association for Psychedelic Studies (MAPS), continued to push for the study, and eventual approval, of MDMA for PTSD, a push that has been taken up by more and more researchers and institutions as psychedelics have entered a research renaissance.

“This is a wonderful, fruitful time for discovery, because people are suddenly willing to consider these substances as therapeutics again, which hasn’t happened in 50 years,” Jennifer Mitchell, UCSF neuroscientist and study lead author, told Nuwer.

The trial: The phase 3 clinical trial, funded by MAPS, enrolled 90 patients in 15 sites across the U.S., Canada, and Israel.

According to MAPS’ release of the data — published in Nature Medicine — the patients had “severe, chronic PTSD from any cause” for an average of 14 years.

In the randomized, blinded trial, participants were chosen at random to either receive MDMA or a placebo in three sessions; the talk therapy for both groups was the same. (The therapists did not know who was in which group.)

Participants first had preparatory sessions with their therapists — a key aspect of MDMA-assisted therapy, as well as other psychedelic therapies.

“It’s not the drug — it’s the therapy enhanced by the drug,” Doblin told Nuwer.

They were then split into two groups and received three treatments, spaced a month apart, incorporating either MDMA or the placebo, in addition to weekly talk therapy.

After their three sessions, 67% of participants in the MDMA for PTSD group no longer qualified for a PTSD diagnosis, MAPS said, with 88% having a “clinically meaningful reduction in symptoms.”

In comparison, 32% of patients in the placebo group no longer qualified for a PTSD diagnosis, and 60% showed clinically significant reduction in symptoms.

As New Atlas points out, these results jog with previous phase 2 studies done by MAPS.

“People with the most difficult-to-treat diagnoses, often considered intractable, respond just as well to this novel treatment as other study participants,” Mitchell said in MAPS’ release.

How does MDMA for PTSD work? Researchers are not completely sure just how using MDMA for PTSD therapy enhancement works; this isn’t unusual when it comes to psychopharmacology.

Nuwer reports that the drug’s ability to pump up the body’s serotonin levels, as well as increasing oxytocin and dopamine production, may lead to the relaxed, happy state which gives MDMA its street name.

The researchers and therapists I’ve spoken to point to that feeling as perhaps the key to MDMA therapy for PTSD’s efficacy: it allows you to face down and work through trauma without becoming overwhelmed. With the psychedelic buffer in place, patients report discovering new insights about themselves.

“MDMA did open up some corridors,” a patient named “Charlotte” previously told me. “Did make available some aspects of my heart and my mind that I hadn’t previously been ready to look at.”

What’s next: MAPS is hoping that the use of MDMA for PTSD therapy enhancement will receive breakthrough therapy designation from the FDA within two years.

To do that, however, the FDA requires more than one phase 3 trial; MAPS’ second phase 3 trial is currently ongoing. Researchers are also studying the use of MDMA to help treat social anxiety in autistic adults and, in a small pilot in the U.K., alcohol addiction.

Drugs
What your weed label really means
Through the largest analysis of commercial cannabis flower yet, Colorado researchers have found that the current labeling system falls short.
Up Next 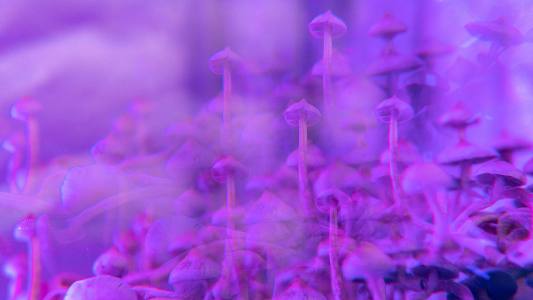 A small study has provided evidence of psilocybin for depression working as well as a popular SSRI.