“Maybe I should tell you a bit about my background with psychedelics?”

“Charlotte” asks me this rhetorically; her answer is absolutely none. (She did accidentally consume a pot brownie once though, which would not be fun coming in blind.)

A 45-year-old woman in the New York area, Charlotte had found herself plateauing after five years in talk therapy with a “stellar” therapist, working through attachment issues stemming from childhood neglect and her parent’s alcoholism.

Psychedelic-assisted therapy is in the midst of a Research Renaissance; no less an august institution than Johns Hopkins has thrown their cash and cache behind the field. The opening of JHU’s Center for Psychedelic and Consciousness Research last fall is merely the most prominent example, as compounds Indigenous people have used for centuries (like ayahuasca) and chemicals stumbled upon in modern labs (like LSD) are being bolstered by science.

The evidence is mounting and the efficacy surprising. Psilocybin mushrooms show great promise for treating the most intractable of depressions — results that are “remarkable,” says JHU’s Matthew Johnson.

Ketamine, the painkiller and party drug, has also been found to work as a fast-acting antidepressant. When I spoke with Yale’s John Krystal — who discovered the effect in 2000 — he gushed about ketamine’s unique potential.

“The rapidity and the magnitude of its antidepressant effects are striking,” he said. “We are used to antidepressants that take weeks to months to alleviate depression.” It worked so fast, in fact, that Krystal said it took years before science could really take it seriously.

And MDMA therapy looks to be singularly effective at helping people with treatment-resistant PTSD. The thinking is that MDMA’s unique effect of getting both your mind racing and your fuzzies warming allows people with PTSD to work through their trauma without suffering its full emotional impact.

Leaning on her background in psychology, Charlotte began the process of preparing herself, working with a therapist to ensure she came into her MDMA therapy session thoroughly informed and comfortable. Hurdles beyond access to MDMA (a controlled substance) stood in her way — the endless litany of psychedelic horror stories; her parent’s substance abuse issues; her own inexperience; a lack of good information on the risks.

She read voraciously, books and case studies and lots of time on Reddit. She learned how to find and make sense of primary research, a skill crucial in her decision to go through with it.

Over the course of three sessions with her therapist, she dealt with the doubt, building trust and rapport and reassurance.

Adequately prepped, in comfortable jammies and water at hand, awash in candlelight and ambient music, Charlotte took the pill, starting her MDMA therapy prone upon her most comfortable couch.

It began corporeally. Her decades of anxious armor, the heavy cuirass which shielded and suffocated her, lifted from her chest.

It was, she says, like she could breathe for the first time in her life.

Rebecca Kronman, a Brooklyn-based therapist, sees the potential benefits. Her clients have similar needs to Charlotte’s: they come to her for help preparing for a safe psychedelic trip that benefits their mental health, as well as integrating and processing what they experienced.

“I think they can create some really profound shifts,” says Kronman, adding that psychedelic therapy is safe and that the drugs are not “something that people have to take all the time.”

Therapists like Kronman are legally only able to bookend psychedelic therapy — she can only prepare clients for their trip and then meet with them afterwards to discuss and integrate their experiences into their lives. She doesn’t actually facilitate the trips or provide the drugs.

It was like she could breathe for the first time in her life.

The research carried out at places like JHU finds a few correlations for lasting benefits of psychedelic therapy. One is that success correlates with a “mystical experience” — basically, the science thus far says you gotta trip to change. (Sorry Silicon Valley, jury’s out on microdosing.)

But before the trip can happen, patients — both in studies and in the real world — go through preparation with therapists like Kronman.

“My job is to help them access as much information as they can to make a decision that feels right to them,” Kronman says.

She wants to know what a patient hopes to get out of their psychedelic therapy experience, to ensure expectations align with reality.

“I think the work that I do is also helping people make sure that they’re … walking into a decision with fully open eyes.”

The Hall and the Dance Floor: Charlotte’s Trips

Prone on the couch, weight lifted, breathing again for the first time, the MDMA kicking in, and …

Approaching this timeless tableau of mother and child, Charlotte is cognizant of a feeling, not the “mommy issues,” something stronger, better … compassion. Imagine the pain, the difficulty of raising a child so soon after one had been wrenched away; how dangerous she must have felt, this living breathing object-permanence-lacking promise, a new warm weight in her mother’s arms, and it had never occurred to her, in over four decades of living and breathing and gaining object permanence, why it may have been so hard to be present, to be responsive, to touch … to touch a hot stove again … and she’s broken into a beautiful sob …

Another session, a few months after the “hallway,” with psilocybin in the system too this time…

she’s at a dance party, a carousel of selves — a baby; a toddler; an ebullient 10 year old, whose charisma is bending the party to her like a star — and Charlotte pulls the DJ aside with a request/warning: she’s coming, Wrecking Ball is coming, and she wants to hear “Bodies.”

Wrecking Ball is Charlotte-at-16 with a sledgehammer, all splenetic attitude and black clothes, and to the cartilaginous crunch of Drowning Pool, she proceeds to wail on … well … her mother. Charlotte sees the anger, sees the violence, sees it all from an arm’s length, and she doesn’t feel the need to flee.

“Each of those little girls, when they would come on to the floor, they were requesting a different song,” Charlotte says.

She’s created a playlist for them all.

However, just having the trip isn’t enough to make an experience therapeutic. Research so far suggests that the insights gained from MDMA therapy and other forms of psychedelic therapy need to be talked through and integrated into the person’s life to translate into any lasting impact.

“Most of the work is happening after the experience itself,” Kronman says. “And it’s ongoing.”

The purpose of integration therapy is not only to help a patient understand what they just experienced but, more importantly, to find ways to apply any benefits gained from the psychedelic experience to their everyday lives.

“The integration itself needs to support the change you’re looking to create in your life,” Kronman says. If the goal is to stymie anxiety, slowing one’s mind with meditation may be an integrative practice.

I think they (psychedelics) can create some really profound shifts.

In session, Kronman is looking to identify areas in a patient’s life where integration can happen sustainably. A balance must be struck between practices that are comfortable and getting just outside the comfort zone enough to change their current condition — that change being why they came to psychedelic therapy, and Kronman, to begin with.

Charlotte emerged from her trip and began her integration process, which took numerous shapes. She couldn’t sleep the night after her first MDMA therapy session; she took totems of the indelible impressions made on her to create a mobile — a player’s piece from Sorry; an object from her mother’s jewelry box.

“It reminded me … of the continuity, that connection that she had lost a child and I had had a lot of challenge around becoming a parent,” Charlotte says. “It took 10 years of failed adoption and things like that. That connection of loss.”

True to the winding nature of mental health, the mobile ended up not being as meaningful to her integration as Charlotte had thought it would be.

What she found to be more impactful was writing letters to her past selves. Weeks after her initial session, her therapist suggested she write to that baby in the hall, send to it the maternal love and warmth that she had felt was missing. She bought four different greeting cards, addressing one to the baby, the others to a 10 year old, a high school student, a college grad heading for their master’s — phases of her life, transiting like the moon.

“It sounds so bizarre,” Charlotte says. “I did this totally chemical free. Like weeks after this (the trip). But it was amazing because as I’m writing, there was this warp of time and space, where I could feel in my heart that I was giving that regard.

“That warmth, that attention and responsiveness” — here her voice begins to swell with emotion — “from someone who loved me, even thought it was me writing to me. It was so bizarre and amazing.”

Charlotte sees the anger, sees the violence, sees it all from an arm’s length, and she doesn’t feel the need to flee.

The MDMA therapy has made a lasting change in her perceptions. She sees more metaphors, more points of relation, for what she is thinking, how she is feeling, a more robust vocabulary for translation. She keeps a journal now, and comes to her standard therapy sessions with intention, rather than just rattling through what’s top of mind.

Charlotte had revelations during her MDMA therapy — and again when she added psilocybin to the regimen for a second session — that she believes would not have come to her without an altered state, a profundity that the antidepressants in her early 20s, when her parents died months apart, could not provide; that had not been discovered in five years of talk therapy, even with an able guide.

“Those images and those experiences have just offered an incredible depth of material to work on in my regular therapeutic session but also in the integration sessions,” Charlotte says.

“MDMA did open up some corridors. Did make available some aspects of my heart and my mind that I hadn’t previously been ready to look at.”

Medicine
How the antidepressant Prozac could treat blindness
Prozac is a widely used antidepressant. Data indicates that the drug could be used to prevent blindness due to macular degeneration.

Medicine
90% of drugs fail clinical trials – here’s one way researchers can select better drug candidates
It’s disappointing when the years of effort and resources spent to push a drug candidate to patients so often lead to failure.

Drugs
Opioid overdose: A bioethicist explains why restricting supply may not be the right solution
Since the unpredictability of drug supply increases overdose risk, making the drug supply predictable should be part of the solution, right?
Up Next 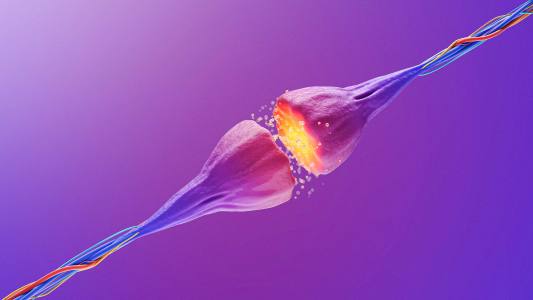 The human brain is a powerful and mysterious place, and researchers have just gotten closer to understanding another important phenomenon taking place inside dissociative experiences.