Microscopic robots — tiny machines that look something like if a Space Invader mated with a miniSD — could one day be crawling through your body. Once the microbots complete their fantastic voyage, they would perform an array of bodily functions; delivering medicine, perhaps, or healing a wound.

As if microbots in general weren’t cool enough, a  Cornell and UPenn research team recently published a study demonstrating that their microbots are able to “crawl” thanks to laser beams.

The microbots appear to be rudimentary, Atari-era cannon fodder. But there’s more than meets the eye here: these bots boast a new type of actuators, “the legs”, which enable them to move. By shining a laser on the solar cell “backs” of the robots, their four legs are propelled forward.

“Each solar cell is connected to a specific leg and by shooting the solar cells in sequence with a laser, you trigger the legs to contract to move in the way you want,” says  Marc Miskin, one of the lead researchers at UPenn.

As you can see below, these won’t win the “most elegant” superlative, but they get the job done.

An Army of Microbots

The team’s microbots can be built using methods already standard for microchip manufacturing: roughly a million of them can fit on a 4-inch silicon wafer. This means that these microbots have the potential to be built on a massive scale. Future production costs could be “less than a penny per robot”, reports CNET.

While they won’t be roaming the human body anytime soon — the bots aren’t capable of administering medications or tracking down a disease just yet — that’s the goal. The bots are small enough to be injected via a hypodermic needle and are made from biocompatible materials.

“Controlling a tiny robot is maybe as close as you can come to shrinking yourself down,” Marc Miskin, assistant professor of electrical and systems engineering told the Cornell Chronicle.

“I think machines like these are going to take us into all kinds of amazing worlds that are too small to see.” 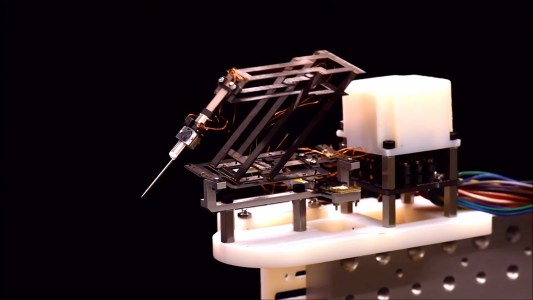 A tiny origami-inspired robot assists surgeons in a mock surgery.