Science is currently in the midst of a psychedelic research renaissance. Long-practiced Indigenous rites and modern party drugs alike are being investigated with empirical methods. Rigorous studies are being done on various psychedelics’ potential for psychiatric treatment — and some of the results have been quite promising.

Ketamine and psilocybin seem to have a dramatic effect on treatment-resistant depression; MDMA therapy looks promising in the treatment of PTSD.

At the same time, there’s been a cultural shift of sorts, as rapturous anecdotes overflow on Reddit — and spill into the mainstream media — extolling the benefits of microdosing mushrooms, LSD, and various other compounds.

It’s kind of the opposite of the tie-dyed, red-shifted view of the 1960s’ psychonauts. You’re not taking these drugs to expand your mind and explore bold new planes of the human psyche — instead, they are meant to enhance your everyday life and make you more present (in the do-work sense, not the one-with-the-universe sense).

Microdosing mushrooms — or any other psychedelic or drug, for that matter — means exactly what it sounds like: taking a very small dose.

By definition, these doses are well below recreational range: they won’t cause you to trip. We’re talking as small as 1/20th what someone would take for fun, perhaps even less; as The Cut put it, “If someone’s seeing things, he or she has taken too much.”

Simple, right? But it gets a bit murkier from here.

Why Do People Do It?

Since they’re not tripping, what do folks get — or believe they get — out of microdosing mushrooms?

Anecdotal reports from the great human chorus that is the internet suggests an array of possible benefits.

Dennis van der Meijden, a graphic designer, producer, and rapper in the Netherlands, told STAT his microdosing of mushrooms provides energy and a heightened consciousness — an improved normal, one supposes.

“It sharpens all the senses, as if the frequencies of all of your atoms and energy field are raised a little bit and are being slightly more conscious,” he told Sharon Begley.

Simone Kitchens over at The Cut wrote about a musician friend taking miniscule amounts to help them feel “more open,” with the original aim of finishing up an album; feelings of enhanced creativity are a common refrain.

This is a world apart from the more dramatic impacts at the heart of the therapeutic research. Those experiments typically involve moderate to high doses, and seek to study the drug’s impact on major issues, like treatment-resistant depression and PTSD — life-threatening disorders that seem to not respond to current therapies.

And that is one reason the scientific jury’s out on microdosing.

Regular Dope Science readers will know that, when it comes to drugs, hard science is relatively new to the party (especially considering some Indigenous uses have been practiced for thousands of years).

And there’s some elements of psychedelic research that makes it extra tricky: for example, how does one make a convincing placebo for something so dramatic as a trip? Are the kinds of people who volunteer for these studies more apt to be taking psychedelics — and therefore more likely to approach them with positive attitudes?

These are real challenges finally being tackled by highly respected institutions, with Johns Hopkins leading the fast break (that’s a lacrosse fast break, mind you, not hoops).

Unfortunately, when it comes to the benefits or drawbacks of microdosing mushrooms, we are still very much in the dark.

Matthew Johnson, associate director of the Johns Hopkins Center for Psychedelic and Consciousness Research and a psilocybin researcher, told me last year that the science just isn’t ready to weigh in on this practice.

That view is echoed by Charles Nichols, professor of pharmacology at LSU Health New Orleans: “I would say the science is still out/inconclusive on all forms of microdosing, be it psilocybin or LSD,” he says via email.

“From a scientific standpoint, the studies just haven’t been performed to assess microdosing of any drug on antidepressant activity, where small doses of drug are administered over long periods of time.”

Is Tripping the Key? Or Just a Side Effect?

What evidence has been gathered thus far for mushrooms as a therapy seems to point in potentially the opposite direction: having a trip seems integral to the therapy working.

Even this isn’t so simple as “trip = treatment,” however; according to Nichols, the intensity of the trip could simply be a biomarker showing that enough of the drug has reached the brain.

“We can induce persistent antidepressant effects in rats and fruit flies with a single treatment of psilocybin,” Nichols writes.

However, “Unless rats have a lot more going on upstairs then we think they do and are capable of existential angst and realization of their place with(in) the universe (…) then the subjective peak experience is not driving the main antidepressant effect.”

Nichols thinks the fact that even simple creatures, like rats and flies, experience the antidepressant benefits suggests that the benefits don’t come from the conscious experience of tripping.

“It might be debatable if rats have some form of rudimentary awareness, but flies as well? I really don’t see that for a fly, but we can nevertheless induce long-lasting antidepressant-like effects in a fly with a single treatment of psilocybin compared to even an SSRI.”

The upshot? Maybe you don’t need to alter your consciousness to get something out of it. But if you don’t take enough of the drug to trip, it might not be enough to work — however it works.

Ultimately, there’s only one way to settle the question of whether microdosing mushrooms does anything for (relatively) psychologically healthy people: large, randomized, placebo-controlled studies. 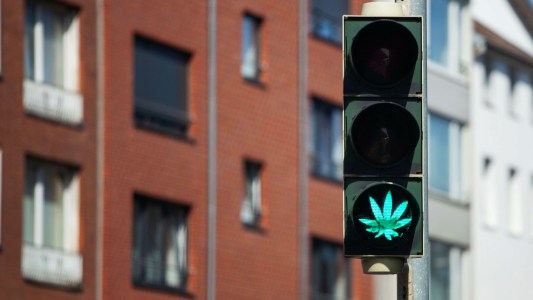 A new study has demonstrated that CBD is safe for driving, while the effects of THC last only a few hours. This work could inform cannabis use laws.