Researchers from the US and China have demonstrated a new way to get messenger RNA (mRNA) therapies into cells — and it could open the door to better treatments for aging, cancer, and more.

mRNA therapies: mRNA plays a vital role in biology, carrying instructions for making proteins from DNA in the nucleus to the part of the cell where proteins can actually be made.

Using mRNA, we can instruct cells to produce specific proteins on demand — the mRNA vaccines for COVID-19, for example, used mRNA to tell cells to produce the coronavirus’ spike protein, teaching the immune system to recognize the real virus.

The fact that mRNA can be manufactured quickly, cheaply, and in large quantities only adds to its therapeutic allure.

“mRNA therapies have the potential to address a number of health issues, from protein loss as we age to hereditary disorders where beneficial genes or proteins are missing,” said Betty Kim, corresponding author of the new study. “There is even the potential for delivering tumor-suppressing mRNA as a cancer therapy.”

The challenge: mRNA on its own is so fragile it would disintegrate or be chopped up by enzymes in our body before it could enter our cells, so mRNA therapies must be encased in some sort of protective delivery vehicle — and our existing options all have limitations.

The mRNA used in the COVID-19 vaccines, for example, is encased in fatty molecules called “lipid nanoparticles,” but these can sometimes damage cells and trigger unwanted immune side effects to the particles themselves. Directing the particles to the right cells in the body can be challenging, too.

Other researchers have been exploring the use of viral vectors (essentially, hollowed out virus particles) to deliver mRNA — but since those look like viruses, they can also trigger the immune system, and because they can only ferry small packages, we can’t use them to deliver larger, more complicated mRNA therapies.

“[The extracellular vesicles’] performance was shown to be superior to … the standard tool for mRNA delivery.”

What’s new? A University of Texas-led team has now demonstrated how “extracellular vesicles” (EVs) can be used to deliver mRNA therapies instead. These are particles that our cells naturally use to transport proteins, lipids, and even genetic instructions between one another.

The particles are an exciting option for mRNA delivery — because they appear naturally in the body, their presence doesn’t trigger an immune response, and they come in a range of sizes that give them a greater carrying capacity than viral vectors.

The demo: As a proof of concept, the researchers decided to use the tech to target wrinkles. In their study, detailed in the journal Nature Biomedical Engineering, they used a technique called “nanoporation” to load up EVs with mRNA instructions on how to create the collagen protein.

They then used microneedle patches to administer the EVs to mice whose skin had been experimentally aged using light. The mRNA entered the skin cells, boosting collagen production and reducing the formation of wrinkles in the rodents’ skin for two months.

“When coupled with a microneedle injection platform, these mRNA loaded EVs achieved impressive long-term efficacy in collagen replacement and wrinkle reduction,” Joseph Wu, Director of the Stanford Cardiovascular Institute, who was not involved in the study, told GEN.

“More importantly,” he continued, “their performance was shown to be superior to [lipid nanoparticles], the standard tool for mRNA delivery.”

Looking ahead: Some more research is needed before EVs could be used to deliver mRNA therapies in people, but Kim is optimistic about their potential.

“This is an entirely new modality for delivering mRNA,” she said. “We used it in our study to initiate collagen production in cells, but it has the potential to be a delivery system for a number of mRNA therapies that currently have no good method for being delivered.” 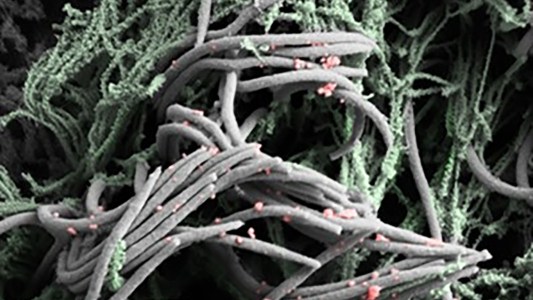 A “morning after” antiviral nasal spray could be created using new knowledge about how SARS-CoV-2 invades your nose.

Coronavirus
Stanford nasal study could lead to “morning after” virus spray
By B. David Zarley
Subscribe to Freethink for more great stories
Subscription Center
Sections
Video
Freethink
Subscribe
We focus on solutions: the smartest people, the biggest ideas, and the most ground breaking technology shaping our future.
Subscribe