An opioid vaccine designed to prevent oxycodone users from feeling “high” is moving from animal trials to humans. If it works as hoped, the shot could help people overcome addiction — and even avoid overdosing if they do relapse.

Opioid use disorder: Opioids are incredibly effective pain relievers, so doctors will often prescribe medications based on them, such as oxycodone and codeine, to people who’ve just had surgery or experienced a serious injury.

However, opioids also produce feelings of euphoria that can lead to misuse — people might take more of the meds than they’re prescribed, purchase them illegally, or use street opioids, such as heroin.

Five times more people died of opioid-related overdoses in 2019 than in 1999.

If they start using the drugs compulsively and in ways that negatively affect their ability to work or lead an otherwise “normal” life, they can be diagnosed with opioid use disorder.

A national crisis: In 2019, an estimated 1.6 million Americans were living with opioid use disorder. That same year, more than 70,000 died of opioid-related overdoses — that’s a five-fold increase over the number who died in 1999.

It is possible to treat opioid use disorder with medications, such as methadone, but about half of the people who take them relapse after six months, according to Sandra Comer, a professor of neurobiology at Columbia University.

Now, Comer is leading a trial to test an opioid vaccine that could help people overcome their dependence on oxycodone, one of the most commonly abused prescription opioids.

The opioid vaccine: This vaccine, OXY-KLH, is designed to trigger the production of antibodies that latch on to oxycodone. That prevents the drug from reaching the brain, where it causes the high many addicts crave, as well as the potentially deadly respiratory depression that comes from overdosing.

The newly announced human trial will test the shot’s safety, tolerability, and ability to produce the desired antibodies. The researchers also hope to find out if the opioid vaccine can prevent the feeling of euphoria in participants given oxycodone after vaccination.

“A vaccine that lasts for several months, given in combination with any of these [treatment] medications, could help many more people beat their addiction and potentially protect them from an overdose death if a patient relapses,” Comer said.

A focused intervention: The opioid vaccine appears to work in mice — treated animals chose to self-administer oxycodone less often and appeared protected from respiratory distress and other signs of toxicity — but that doesn’t mean it’ll work in humans.

The antibodies only work on oxycodone specifically, meaning it wouldn’t help people addicted to heroin, codeine, morphine, or other opioids.

However, that focus could be a blessing — if a vaccinated person needed an opioid to treat pain, their doctor could prescribe one of the other meds. Plus, if the shot works as hoped, ones targeting other opioids could follow — heroin and fentanyl vaccines are already in development.

“Clinicians would be able to give the oxycodone vaccine to individuals who mainly use that particular drug but could also administer additional opioid vaccines for those who use other opioids or to prevent patients from switching to another opioid,” Comer said.

Medicine
New drug combo is “a paradigm shift” in preventing asthma attacks
The combination of a rescue medication and a corticosteroid, taken as needed, reduced both short and long-term risk of asthma attacks.

Drugs
AI maps psychedelic “trip” experiences to regions of the brain – opening new route to psychiatric treatments
To better understand how these effects manifest in the brain, we analyzed over 6,000 written testimonials of hallucinogenic experiences.
Up Next 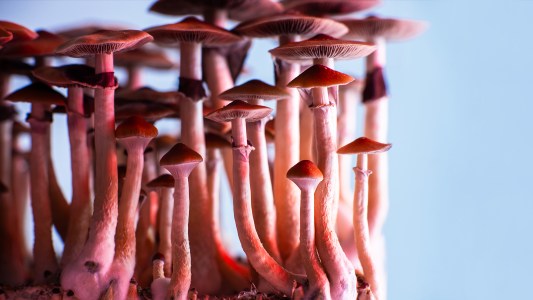