A cushion that “breathes” appears to reduce anxiety for students about to take a test, suggesting a potential new path for helping manage stress and anxiety.

The challenge: Clinically, anxiety is a feeling of dread or fear, and while it’s a completely normal way to react to a stressful situation, such as an important meeting or test, it’s still unpleasant, and it can interfere with productivity and social life.

Nearly 20% of Americans have an anxiety disorder, which means they experience those unpleasant feelings most days for six months or longer — that can impact their ability to work, have relationships, and more.

There are ways to reduce anxiety, whether it’s due to a disorder or a stressful situation, but the most common options have limitations — the cost of therapy can be prohibitive, while medications can be expensive and have unwanted side effects.

The idea: Physical touch — from a hug or massage, for example — can minimize anxiety, too, and a burgeoning field known as “affective haptics” has shown that devices, such as social robot PARO, can actually replicate the benefits of human touch.

Researchers at the University of Bristol decided to explore this form of anxiety relief by developing a tactile device of their own.

The “breathing” cushion reduced anxiety as much as a guided meditation app.

They started by making several prototypes of a soft, huggable cushion, including one that pulsed like a heart, and another that vibrated to create a “purring” sensation. Another cushion contained a silicon chamber that was inflated and deflated by an external pump to simulate breathing.

A focus group identified the “breathing” cushion as being the most calming, so the researchers set out to test whether it could actually reduce anxiety prior to a stressful situation.

The study: 129 college students, without diagnosed mood disorders, filled out questionnaires to measure their baseline anxiety levels. They were then told that they’d be taking a math test, and they’d have to say their answers aloud in front of other study participants.

The participants were then divided into three groups of about the same size. One group listened to an eight-minute-long guided meditation through headphones, another hugged the breathing cushion for the same amount of time, and the third group did nothing for the eight minutes.

Lingering questions: More research is needed to determine whether the breathing cushion could reduce anxiety for people with mood disorders or in situations beyond a pop quiz.

It’s also not yet clear how the device works, but the researchers hope that studying how future study participants’ bodies react to the device —  looking at variables such as heart rate and breathing pattern — might help explain that.

More the merrier: The fact that existing guided meditation apps appear to deliver the same level of anxiety relief calls into question the need for a breathing cushion, but lead researcher Alice Haynes sees a place for it in helping people keep anxiety levels low.

“A benefit of the cushion is that we haven’t had to give anyone guidance on using it — it seems to be very intuitive,” Haynes told New Scientist. “It’s familiar and you don’t have to use an app or be on your phone or any of your devices.”

“I think, ultimately, it’s just nice to give people with anxiety a choice of different ways to support themselves,” she added. 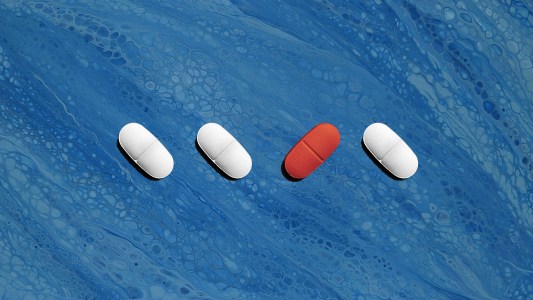 A meta-study of placebo effect research has revealed a link between the phenomenon and brain stimulation as a depression treatment.