Brown University researchers have developed a new material that they hope will one day swiftly deliver drugs to stop infections in wounds — but activate only when there are bacteria around to kill.

The new gel material will release its drugs only in the presence of a specific enzyme that bacteria release. Working only as-needed and with a guaranteed target may help improve patient safety, treatment efficacy, and prevent bacteria from evolving resistance.

“Our hypothesis is that technologies like this, which reduce the amount of drug that’s required for effective treatment, can also reduce both side effects and the potential for resistance,” Brown School of Engineering associate professor and lead developer Anita Shukla said in a statement.

Smart delivery: The team’s drug delivery system, published in ACS Applied Materials & Interfaces, is made from a hydrogel.

These gels are highly biocompatible, and can be used to package a range of nanoparticles and small molecule drugs, or provide a scaffolding for cells.

Researchers are using them to 3D print organs and nose cartilage, to deliver slow-release vaccines, and as nextgen dressings for wounds.

“Smart” hydrogels that respond to their environment — for example when certain temperature or pH thresholds have been reached — are also being created to deliver drugs exactly where and when they are needed.

To β or not to β: Shukla and her colleagues’ smart hydrogel is designed to react to β-lactamases, enzymes that are released by a number of nasty bacteria.

When the hydrogel is exposed to β-lactamases, it degrades, releasing the therapeutic nanoparticles contained within it — hoisting the bacteria on its own petard.

“What’s interesting is that β-lactamases are actually a major cause of antibiotic resistance as they destroy β-lactam antibiotics, which are some of our most commonly prescribed antibiotics,” Shukla said. “But we’ve taken this bacterial defense mechanism and used it against the bacteria.”

Working only as-needed and with a guaranteed target may help improve patient safety, treatment efficacy, and prevent bacteria from evolving resistance.

The hydrogels were tested in the lab and on pig skin infections, and they proved to only release their payload when β-lactamases were present.

With further refinement, its creators hope that the material can be used as a wound dressing that’s not only more responsive and better tolerated but also helps prevent antibiotic resistance from developing in wounds. 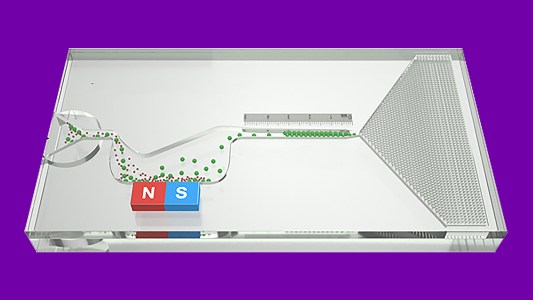