Swiss researchers have developed “wearable muscles” that use sensors and AI to help people with upper-limb impairments use their arms — in testing, their device increased endurance by more than 200%.

The challenge: Impaired arm function can have a major impact on quality of life — something as simple as making a meal or dressing oneself can be hugely difficult if your arms are weakened by disease or injury.

We’ve seen wearable robots or exoskeletons that can help people with upper-body mobility issues, but they’re often expensive and awkward, which can make them less than ideal for everyday use at home.

Impaired arm function can have a major impact on quality of life.

The device consists of a chest harness and a cuff worn around the upper arm and forearm. Cables run from the cuff to a shoulder anchor and down to an external control box.

Sensors embedded in the fabric detect motion. An algorithm uses that information to predict the wearer’s intended arm movement and trigger a motor in the control box to pull the cables. These act like artificial tendons, helping support the movement.

The impact: For their study, the Myoshirt was worn by 12 participants. One had a rare form of muscular dystrophy (MD), one had a spinal cord injury, and 10 had no physical impairments.

Each participant sat with their arm straight out in front of them with a load hanging from their forearm. They were then asked to lift and lower their arm until exhaustion. The task was completed with the wearable muscles one day and without them on another.

Looking ahead: While the results of the endurance tests are promising, the ETH team still has more work ahead of it before the Myoshirt will be ready to help people in their homes.

The device’s external control box weighs 8.8 pounds, and more than half the participants felt like the wearable muscles restricted their comfort and movement capabilities — the goal now is to reduce the Myoshirt’s size and weight so that it can be comfortably worn under clothing.

“In the next phase, we want to test our prototype outside the lab in the natural environment of future wearers and use the results to further improve it,” said ETH researcher Michele Xiloyannis.

Wearables
Wearable tech: eating and playing our way to a longer lifespan
Wearable devices can detect the specific molecules in food and our body’s response to it, allowing us to make better dietary decisions. 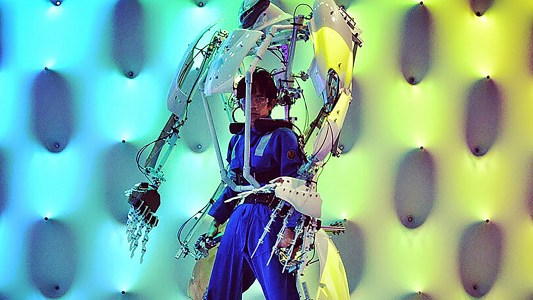 Japanese company Skeletonics has developed a new exoskeleton that lets you enter the boxing ring as a nine-foot-tall robot.

Robotics
New exoskeleton lets you enter the boxing ring as a robot
Subscribe to Freethink for more great stories
Subscription Center
Challenges
Video
Freethink
Subscribe
We focus on solutions: the smartest people, the biggest ideas, and the most ground breaking technology shaping our future.
Subscribe