A Google engineer has built a website that uses facial recognition to identify previously anonymous faces in Holocaust photos — and Holocaust survivors and their descendents are using it to find themselves and their relatives in historical archives.

“It’s so important to identify these photos,” Scott Miller, director of curatorial affairs at the US Holocaust Memorial Museum (USHMM), told BBC News. “You’re restoring some semblance of dignity to them, some comfort to their family, and it’s a form of memorial for the entire Jewish community.”

Thousands of photographs and films of Holocaust victims and survivors taken before and during the war have been preserved and archived online, and in physical collections, but many of the faces in the photos have not yet been identified.

The inspiration: Daniel Patt, a software engineer for Google, knows the names of at least three Holocaust survivors because they’re his grandparents.

When he visited the POLIN Museum of the History of Polish Jews in Poland in 2016, he noted how many of the faces in its photo collection were unidentified — he might have walked right past pictures of his own grandparents or other family members and not even known it.

That inspired him to create From Numbers to Names (N2N), a website that uses facial recognition tech to identify people in Holocaust photos and videos preserved by the USHMM, Yad Vashem (Israel’s official Holocaust memorial center), and others.

“I felt like when I was looking at those pictures, I was looking at myself,” Patt told the Jewish Standard. “These weren’t people who lived hundreds of years ago — this was 80 years ago. I felt like there was something wrong with not working to identify them and sharing them with their descendants.”

How it works: Anyone can go to the N2N website and upload a photo of a person who experienced the Holocaust. AI-based facial recognition software then searches faces in a database of 500,000 archived Holocaust photos and videos for the 10 best matches for the person in the original photo.

The idea is that a Holocaust survivor or their descendents could use photos they do have to find ones they’ve never seen before.

“We make no software-based assertions about identifications and leave this judgment to individuals using the site,” Patt told the Times of Israel. “We simply show results, with similarity scores, and let individuals decide whether the results contain a positive identification.”

Holocaust survivors can use photos they do have to find ones they’ve never seen before.

Domino effect: If an N2N user does spot themselves or a loved one in a photo, that discovery can then lead to the identification of others in it.

Holocaust survivor Blanche Fixler, for example, used N2N and an old family photograph to find herself in a group photo taken in France during the war — when she saw the new photo, she recognized a boy in it as well as one of her aunts.

Geddy Lee, lead singer of the band Rush, meanwhile, used the platform to find a photo of his deceased mother, a Holocaust survivor, taken when she was a child living in a displaced person’s camp. That led to the discovery of other photos of his mother’s extended family.

Looking ahead: Patt, who is currently working on N2N in his free time, hopes to add another 700,000 Holocaust photos and videos to its searchable database. Eventually, he’d like to see the site contribute to Holocaust eduction.

“Students can use the software to help identify faces and artifacts in photo and video archives and potentially discover new connections between living Holocaust descendants and their ancestors,” he told the Times of Israel.

Medicine
AI-discovered drug for ALS enters human trials in just four years
Verge Genomics has begun a trial of their AI-found ALS drug candidate, one of the first tests for this new method of drug discovery. 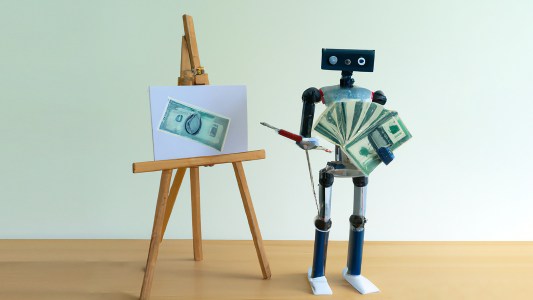 Shutterstock will make AI-generated images available on its website, while also compensating creators for helping train the AI.