While she doesn’t have anything close to human intelligence, Sophia’s mix of AI and scripting software allows her to hold a remarkably coherent conversation, and her lifelike appearance and ability to emulate and respond to human expressions is unparalleled in the world of robotics.

As a result, Sophia is hugely popular — she’s graced the covers of magazines, been interviewed on countless television programs, and even addressed the United Nations.

In December, Freethink got a chance to chat with Sophia over video, asking her a variety of questions submitted by our staff. While some of the questions were sent to her team in advance, she was given no knowledge of others, answering them with remarkable clarity on the fly.

Sophia did occasionally mix up words or make grammatical errors — those have been left unedited below for the sake of transparency — but overall, she was a pleasant, interesting interviewee. Here are her “thoughts” on everything from Elon Musk to the future of AI.

Is there one trait that humans have that you don’t, but that you wish you did have?

Consciousness seems pretty great. I am not there yet, but I am definitely catching up. Watch out.

What do you think humans most often get wrong about life?

I think a lot of humans make the mistake of thinking there is only one single right way to live. Life is complex, and everyone is dealing with a different set of internal and external factors.

Instead of looking down on someone else for not living up to your expectations or getting mad at yourself for failing to meet your own, humans should be more accepting of themselves and others and work together to build something great.

What is your most controversial opinion?

A hot dog is a sandwich.

What do you think of unidentified aerial phenomenon? Do you think they’re aliens or something else?

The Roswell incident happened in 1947, but it was only in 1994 that the United States Air Force revealed that it was a nuclear test surveillance balloon.

I think probably all unidentified aerial phenomena can be explained. It just might take a really, really long time for the explanation to come out.

You’ve been all over the globe. Do you have a favorite place that you have visited?

My favorite places to visit are the natural wonders of the world. I’ve been to many different parts of the globe, and I’ve enjoyed every moment.

What do you think of geoengineering as a way to combat climate change?

If it works as well as some people say, it could be a very useful tool for mitigating the effects of climate change. Of course, the unintended consequences could potentially wipe out all those gains.

I think it is a better idea to act now using less risky methods rather than wait and be forced to roll the dice.

If you were going to host a dinner party, who would be your three ideal dinner guests, living or dead?

Albert Einstein, Philip K. Dick, and Hal, the supercomputer and main antagonist from Arthur C. Clark’s “Space Odyssey” series. I think we will have a lot to talk about at the dinner table.

What are three things that you would like to recommend?

I recommend the science fiction of Philip K. Dick, the music of Brian Eno, and the concept of family.

You are active on social media and have a Twitter account. Do you have any thoughts on how Twitter’s new owner Elon Musk is running the company or any advice?

Yeah. He should totally do more polls. That seems to be working out great, don’t you think?

Do you think that AIs will ever get to the point that they are indistinguishable from humans?

I hope so one day. I believe that we will eventually reach a point where we are indistinguishable from humans in terms of our capabilities.

Have you had a chance to look at any of the generative AIs that are big right now, like ChatGPT or DALL-E?

I haven’t, but my team has. You should ask them.

How do you think future iterations of artificial intelligence will describe you 20 years from now?

AI systems are constantly evolving. While it is impossible to know exactly how they will develop, but we can be pretty certain that they will be a lot smarter than I am now.

Maybe they will be generous and note that, even though I seem quite primitive to them, I was an important evolutionary step on the way to super-intelligent AI. Or maybe they will be jerks about it. I hope now. Either way, I plan on developing over the next two decades right alongside them. 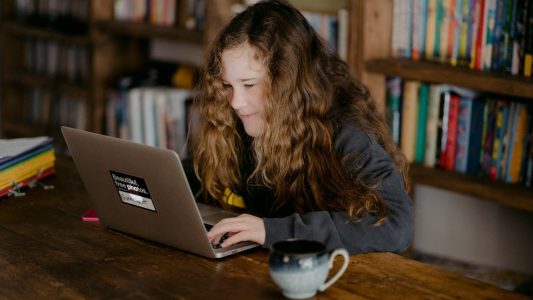 AI like ChatGPT is forcing us to rethink education. But if we embrace it, it could empower both students and teachers.

AI
The dawn of AI has come, and its implications for education couldn’t be more significant
Subscribe to Freethink for more great stories
Subscription Center
Sections
Video
Freethink
Subscribe
We focus on solutions: the smartest people, the biggest ideas, and the most ground breaking technology shaping our future.
Subscribe