From camembert to stilton, the rich and diverse flavors that make cheese taste so delicious are strongly connected to beneficial bacteria, which spontaneously grow inside the cheese as mold ripens on its surface.

As they degrade the proteins and lipid molecules found in milk fat, these microbes trigger complex chemical and microbiological reactions, which shape the tastes and physical textures in cheese which many of us know and love.

And, for the first time, a new set of experiments has shown how the unique flavors of different cheeses can be linked to specific types of bacteria that develop as they ripen. The discoveries could lead to new and improved cheesemaking techniques, enhance the safety of cheese production, and — possibly — even create distinctive new flavors.

The challenge: Despite the important roles bacteria play, cheesemakers have only recently started to pay them much attention to their specific roles in producing cheese’s characteristic flavors. In many cases, their ingredients and processing techniques were developed over centuries, with no detailed knowledge of the microbiological mechanisms involved.

Today, these traditional cheeses are incredibly diverse — and incredibly chemically complex. Because of this, researchers have so far been unable to uncover connections between specific types of bacteria, and the flavors they produce.

The flavors of different cheeses can be linked to specific types of bacteria that develop as they ripen.

Banking bacteria: Now, a team of researchers in Japan have designed a new experiment to identify and examine the specific bacteria responsible for producing characteristic cheese flavors.

In their study, Morio Ishikawa and colleagues at the Tokyo University of Agriculture drew from their previous research involving three specific phyla of bacteria: named Actinobacteria, Proteobacteria, and lactic acid bacteria.

Using advanced statistical analysis, the researchers proved for the first time that these microbes are indeed responsible for producing the chemical compounds associated with the flavor of ripened cheeses.

The team took this research a step further in their latest study, through a series of experiments involving mold-ripened cheeses from France and Japan. In this study, they isolated the specific bacteria identified in their previous research, and introduced them to ripening cheeses kept in sterile containers, to prevent other microbes from interfering with the process.

The experiment, detailed in the journal Microbiology Spectrum, showed that the diversity and composition of the bacteria which develops in the ripening process depends on several factors: including whether the milk is raw or pasteurized, and whether the microbes are found in the core or rind of the cheese.

As they predicted, Ishikawa and his colleagues found that in the ripened final products, each type of bacteria produced a unique set of the chemical compounds responsible for giving cheeses their distinctive flavors.

In particular, one type of Proteobacteria named Pseudoalteromonas could be linked to the presence of several flavourful compounds: including acids, esters, which give off a fruity taste; ketones, which produce musty, moldy flavors; and sulfur-containing chemicals, which give off the pungent aromas especially strong in stinky cheese.

Beyond safety, the team’s findings could allow cheesemakers to improve on traditional techniques, with a new focus on the microbial interactions playing out within ripening cheese.

This could enable them to improve the quality of their cheese, and possibly even engineer a diverse array of brand-new flavors. 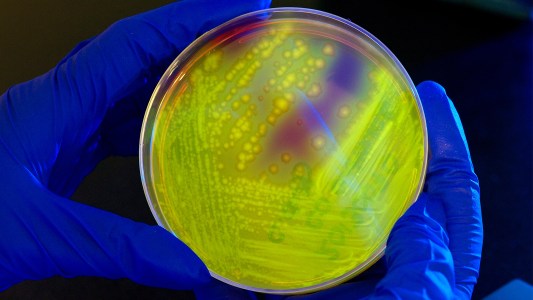