The majority of consumers are blissfully ignorant that the egg industry slaughters billions of baby chicks per year — and not even for human consumption. Instead, half of the little birds are killed immediately because they can’t lay eggs, because they’re male.

The practice, called chick culling, is widespread across the industry. Indeed, the best eggs you could buy, like free-range, organic, even “certified humane,” may come from well-treated hens, but that doesn’t mean the male chicks weren’t culled. Male chick culling occurs in almost all egg manufacturing supply chains in the United States.

An Israeli startup, EggXYt, has a solution: edit the genes of chickens, so they lay eggs with a built-in, glowing sex ID tag.

The problem: Chick culling is the practice of killing small, day-old male chicks with a variety of fairly gruesome methods. Billions of chicks are killed this way each year — about 300 million in the U.S. alone. As the eggs hatch, specialized “sexers” sort the chicks by hand — the females survive, while the male birds are culled.

If your gut reaction to chick culling is, “Gasp, how could they do that?” Then consider this: the industry doesn’t enjoy the process either. It is unpleasant, costly, and wasteful. But there is a biological and economic rationale to support the dreadful practice. Simply put, male chicks don’t lay eggs, and they are too small to be sold for meat.

The challenge: Despite being an age-old practice, the industry is changing. France and Germany have pledged to ban culling by 2022.

In the United States, the United Egg Producers vowed in 2016 to stop culling male chicks as soon as it was economically feasible, reports Fast Company. But the group also stated in 2020 that no viable alternative existed: raising billions of animals with no economic value was a complete nonstarter for farmers.

Some solutions already exist to reduce the execution rate. For example, one company uses a robot to fire a pin-hole into the egg, extract some liquid, and look for sex hormones. But the process only works after some incubation time, and even a tiny hole could expose the embryo to harmful bacteria or viruses. Another startup transforms male chickens into egg-laying females. But researchers are still looking for an economical, non-invasive alternative to chick culling.

Yehuda Elram, CEO of EggXYt, says his co-founder, neuroscientist Dani Offen “was astounded by the animal welfare implications and the sheer amount of waste in an industry whose end product so many consumers enjoy,” reports Fast Company.

A powerful new solution: The team at EggXYt uses CRISPR to edit the genes of chickens so that a biomarker appears on the male chromosome. (EggXYt also happens to be genetically engineering chickens that are resistant to avian bird flu, as Freethink reported earlier).

Once engineered, they can slip the eggs through a scanned — sort of like an airport security belt — and under the scanner, the biomarker glows. The eggs can be sorted automatically by sex without cracking the shell. The process could save time and money, since sexers will sort out the male eggs before placing them in the incubator.

“Consumers care more and more about how food gets onto their plate and what happens between farm and fork,” Elram told Israel 21c. “This trend is only growing.” 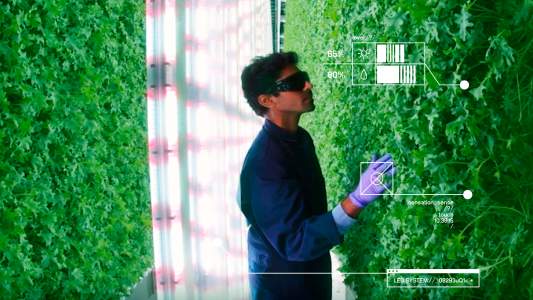 Vertical farming saves water, land, and energy — and it could be how we grow food on Mars.

Series | Hard Reset
Vertical farms could take over the world11:04
Subscribe to Freethink for more great stories
Subscription Center
Sections
Video
Freethink
Subscribe
We focus on solutions: the smartest people, the biggest ideas, and the most ground breaking technology shaping our future.
Subscribe