Researchers at the University of Bristol have digitally recreated a dinosaur brain using advanced imaging and 3D modeling techniques — and leading to the discovery of some unusual characteristics of the ancient creature.

“It’s great to see how new technologies are allowing us to find out even more about how this little dinosaur lived more than 200 million years ago,” professor of vertebrate paleontology Mike Benton, the study’s co-author, said in a statement.

Thecodontosaurus, also known as the Bristol dinosaur, is one of the earliest dinosaurs we have fossils of. While discovered in the 1800s, the technology needed to create models detailed enough to unlock new insights— without destroying the precious fossils — has only recently become available.

Thecodontosaurus resembled some of its later, long-necked relatives — like the childhood favorite Brontosaurus — but as a quasi-comical miniature, roughly the size of a hefty dog.

At least, that’s what we thought. But the researcher’s model dinosaur brain has called its form of locomotion into question — and it’s even reopening the debate about what it ate.

“The braincase of Thecodontosaurus is beautifully preserved so we compared it to other dinosaurs, identifying common features and some that are specific to Thecodontosaurus,” lead author Antonio Ballell said in the release.

By using a CT scan, the researchers could create models of the long-gone dinosaur brain in the cavities left behind. That revealed parts of the brain that are important for balance, as well as eye and neck movements.

They were also able to recreate the Bristol dinosaur’s inner ear, which suggested a heightened hearing range — possibly a subtle sign of social complexity, as it could allow for differentiation between various honks, squawks, squeaks, what have you.

The dinosaur brain also yielded some other “quite surprising” information: its floccular lobes, which control balance, were really large.

According to Ballell, this suggests two things that would turn our understanding of Thecodontosaurus on its ear.

It’s great to see how new technologies are allowing us to find out even more about how this little dinosaur lived more than 200 million years ago.

First, it did not walk on all fours like the Brontosaurus.

“(The lobes’) large size indicate it was bipedal. This structure is also associated with the control of balance and eye and neck movements, suggesting Thecodontosaurus was relatively agile and could keep a stable gaze while moving fast.”

This, in turn, according to the researchers, also provides some clues to what it ate.

That’s because keeping a wideout-steady gaze while moving at speed is exactly what you’d expect from a predator.

The team’s analysis, published in the Zoological Journal of the Linnean Society, suggested that it may have had catch-and-kill capabilities, although other aspects of its anatomy argue a bit differently: its teeth are well designed for plants.

Ballell’s got a pretty simple potential solution to this mystery, however: “It’s possible it adopted omnivorous habits.”

Engineering
Ancient creatures inspire record-breaking new technology
Inspired by the ancient compound eyes of the trilobite, researchers have created a record-breaking camera with a depth of field of just over a mile.

Paleontology
Fossil of oldest octopus and vampire squid relative may reveal 10-armed past
A newly described fossil may be the oldest relative yet found of octopuses and vampire squids — although if it is a new species at all is disputed.

Paleontology
Clues in woolly mammoth tusk reveal a lifetime of travels
Researchers have reconstructed the life of a woolly mammoth that lived more than 17,000 years ago by deciphering clues hidden in his tusk. 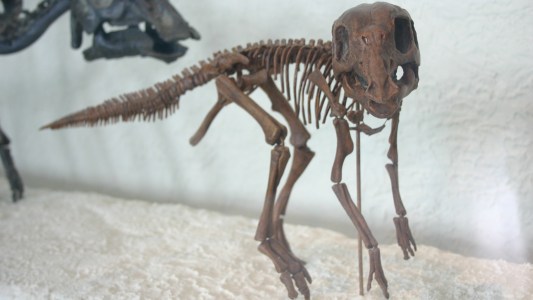 Researchers have found what appears to be DNA in a dinosaur fossil — a discovery that could radically change our understanding of DNA’s ability to survive.

Paleontology
Scientists find what looks like DNA in a dinosaur fossil
Subscribe to Freethink for more great stories
Subscription Center
Sections
Video
Freethink
Subscribe
We focus on solutions: the smartest people, the biggest ideas, and the most ground breaking technology shaping our future.
Subscribe