Inspired by ancient, ocean-dwelling creepy-crawlies, the National Institute of Standards and Technology (NIST) has created a record-breaking miniature camera that takes sharp photos over a staggering distance.

The camera’s depth of field means that it can shoot crystal clear from a range of 3 centimeters to just over a mile (1.7km) away. Using a computer algorithm, the researchers could correct for aberrations and sharpen objects over the entire depth of field, NIST announced.

Such a large depth of field means better images when you need to keep both near and far subjects in focus, including cityscapes or groups of organisms in a wide field of view, NIST said.

Trilobite eyes: Trilobites — a very distant relative to horseshoe crabs — ruled the world hundreds of millions of years ago, plying primordial oceans armed with their compound eyes — some of the earliest arthropods to have them.

They were extraordinarily successful animals, thriving across 300 million years of Earth’s history and evolving into 20,000 unique species so far identified.

One trilobite in particular, Dalmanitina socialis, had especially impressive vision.

Dalmanitina had bifocal eyes, with two lenses that bent light at different angles. This gave them a large depth of field, allowing them not only to see nearby prey, but to keep an eye out on the horizon to ensure they didn’t become prey.

“To the best of our knowledge, this type of compound-eye visual system is unique to Dalmanitina socialis,” the researchers wrote in their Nature Communications study.

Designing for depth of field: NIST researchers Amit Agrawal and Henri Lezec, as well as colleagues at the University of Maryland and Nanjing University, adapted the ancient arthopod’s approach to create their record-breaking camera.

The camera can take sharp photos in a staggeringly large depth of field — from three centimeters to just over a mile away.

The team created tiny lenses known as “metalenses,” which were studded with millions of tiny, nano-sized pillars. The shape and angle of these pillars focused light in two different ways, making the metalenses work both as a macro lens (for close ups) and a telephoto lens at the same time.

But the camera would make objects in between its two extremes out of focus. To overcome this, the researchers turned to a neural net AI, which they trained to recognize and correct where the tiny pillars are imperfect at their job, New Atlas explained, so that it could correct for blurriness, color aberration, and other optical issues.

Despite being extinct for 200 million years, we can still learn things from these ancient creatures — with a little help from modern computers. 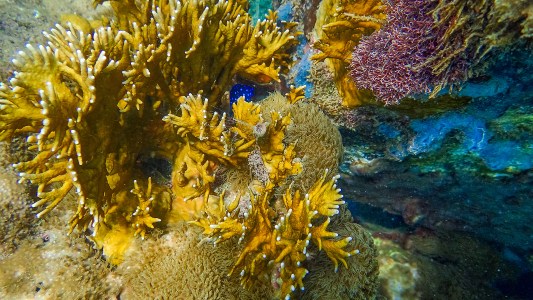 Researchers have discovered that common soft corals are the source of a sought-after anti-cancer compound.

Medicine
The source of a strange anti-cancer compound is found in Florida
Subscribe to Freethink for more great stories
Subscription Center
Sections
Video
Freethink
Subscribe
We focus on solutions: the smartest people, the biggest ideas, and the most ground breaking technology shaping our future.
Subscribe