Private citizens are helping scientists track the recent earthquake in Haiti by opening their homes and workplaces to low-cost quake-monitoring devices.

Data hungry: Earthquakes are triggered by movement along underground faults. This movement causes waves of energy to flow through the Earth, and seismographs can measure those waves.

Seismographs can’t predict earthquakes — nothing can — but data from networks of them can help determine the magnitude of a quake and pinpoint its epicenter, letting first responders know what level of damage to expect and where it’s concentrated.

“When it comes to locating quakes, determining magnitude — they are really excellent.”

The devices can also be used to map aftershocks — smaller follow-up earthquakes — and those maps can help seismologists determine the cause of a quake and predict the risk of future events in a location.

The challenge: At the time of the devastating 2010 earthquake in Haiti, the nation had just one station monitoring seismic activity, so collecting aftershock data was difficult.

By the time a 5.9 earthquake hit in 2018, Haiti had several stations — but only one was in operation due to a lack of resources.

These devices are typically marketed to hobbyists and aren’t nearly as advanced as Haiti’s official stations, but they cost just $500 each, making them 100 times cheaper.

Citizen seismologists: Using money left over from a grant, Calais purchased several Raspberry Shakes and distributed them to people in Haiti with reliable electricity and internet connections.

Calais’ team has kept a network of 15 Raspberry Shakes operational for two years now, and in the week following the recent 7.2 magnitude earthquake in Haiti, the devices collected data on 600 aftershocks — about 60 times more than was collected after 2010’s quake.

“We now have very strong information about not only where the [14 August] quake occurred, but also how wide the rupture was, in which direction the fault was dipping,” Calais told Nature.

The team already has plans to add 50 more stations to the network, too, so if there’s another major earthquake in Haiti in the future, scientists should have even more data to help them study it.

Climate Crisis
These ancient trees survived a wildfire because of fire
The survival of an ancient grove of trees in Yosemite may be a powerful case study for controlled burns.
By B. David Zarley

Aerospace
This is the damage a tiny speck of space debris can do at 15,000mph
A crater 5 inches deep was caused by something about the size and weight of an eraser on the end of a pencil.
By Ned Dymoke
Up Next 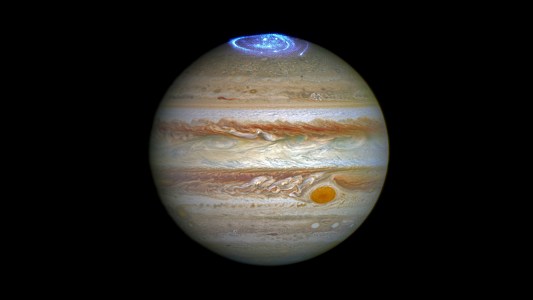 An amateur astronomer has spotted an unknown moon of Jupiter, marking the first discovery of a planetary moon by a non-professional.