A Japanese startup is now selling the first food edited using CRISPR — a gene-edited tomato that may be able to lower your blood pressure.

GABA boost: Gamma aminobutyric acid (GABA) is a compound produced naturally in our brains. Because it’s been linked to reduced feelings of anxiety, some people take supplements or eat foods with high levels of GABA to relieve stress, sleep better, and lower blood pressure.

Some plants are even cultivated to have higher-than-normal GABA levels, but the farming techniques used to do that can be labor intensive and affect crop yields.

The gene-edited tomato contains four to five times as much GABA as its unedited counterpart.

Gene-edited tomato: Now, Japanese researchers have used CRISPR to create a tomato that produces less of an enzyme that breaks down the plant’s natural GABA. The resulting gene-edited tomato contains four to five times as much GABA as its unedited counterpart.

Because the researchers didn’t add anything to the tomatoes’ genome, Japanese authorities decided in December that the fruits needn’t be regulated as “genetically modified” crops, saving the team from a long and expensive approval process.

In early 2021, the researchers started giving away Sicilian Rouge High GABA seedlings, and on September 17, they announced plans to begin selling the tomatoes themselves through the Sanatech Seed startup.

A 6.6 pound box of the gene-edited tomatoes costs about $68.

The bigger picture: The tomatoes appear to be the first CRISPR-edited food to be sold commercially anywhere in the world (a CRISPR-edited fish is being sold on a trial basis through a Japanese crowdfunding campaign).

However, the gene-edited tomato isn’t the first edited food to hit consumers’ plates — a cooking oil made from soybeans, edited using a different tech, went on sale in the U.S. in 2019.

CRISPR is lauded for its precision and ease of use compared to other gene-editing technologies, though, and now that one food developed using the technology is out in the world, we could see many more follow suit.

Food
Light pulses can stop dangerous food poisoning like Salmonella
A team at Penn State has developed a pulsed light technique capable of killing common food poisoning pathogens.
Up Next 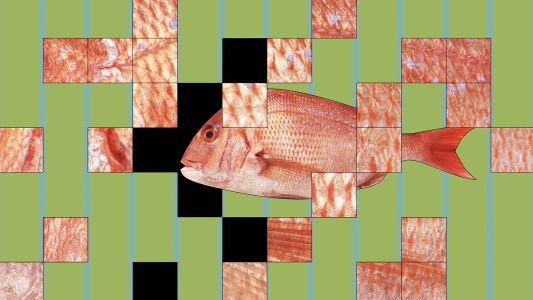 A gene-edited fish that grows up to 60% more muscle on the same amount of feed could help revitalize Japan’s aquaculture industry.