Wisconsin startup Cultured Decadence is on a mission to bring lab-grown lobster meat to market, delivering the taste of the succulent seafood in a more sustainable way.

The plan: Lab-grown meat is a booming industry, but most of the players in it are focused on creating beef and chicken.

Cultured Decadence hopes to make waves in the world of cultured seafood, starting with lab-grown lobster and eventually branching out to shrimp, scallops, and crab.

Why it matters: Lobster is a healthy meat (as long as it’s not drenched in butter), and if we could produce more of it, the crustaceans could help address the global protein shortage.

Unfortunately, farming lobsters is difficult, meaning the vast majority of those that end up on dinner plates are wild caught — and climate change is threatening that supply.

“We see the East Coast’s fishery moving further north and out to deeper waters as the ocean temperature is warming and there’s increasing acidification,” Cultured Decadence’s CEO John Pattison told Seafood Source. “It’s having a real effect on this fishery.”

“At the same time, demand is rising both domestically and globally,” he added, “and we think we can help fulfill that demand long-term.”

How it works: The startup’s process for making its lab-grown lobster follows the same recipe as other cultured meats.

It starts by collecting tissue samples from actual Maine lobsters. It then isolates cells from those samples and grows them in a nutrient-rich medium.

We want to make a 10-pound lobster tail that already has the butter infused into it.

The cold water: So far, Cultured Decadence has only produced incredibly small portions of its lab-grown lobster — less than a gram.

Even if it can scale up its product and prove it’s something people want to eat, the startup will still need to secure regulatory approval before it can sell its cultured meat to anyone — and that’s something only one company has been able to do, with one meat, in one nation.

What’s next: In April, Cultured Decadence announced that it had raised $1.6 million in funding, which it will now use to continue developing its lab-grown lobster.

It hopes to have sample-sized pieces ready within 12 months and a commercial product ready for market in a few years. After that, the startup plans to get really ambitious.

“Long-term, we want to make something that doesn’t even exist,” Pattison told Bloomberg. “We want to make a 10-pound lobster tail that already has the butter infused into it.” 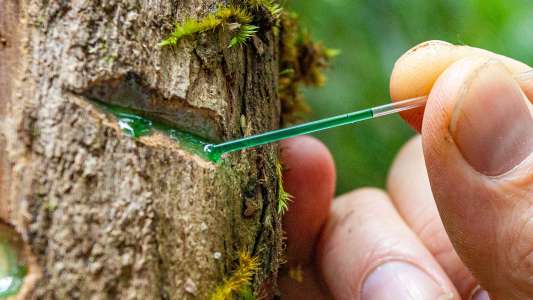 Phytomining, a technique that uses trees to soak the metals out of contaminated soil, could offer new ways to mine for metals that are more sustainable than the existing, environmentally destructive methods.

Agriculture
“Phytomining” trees can extract metal from the Earth
Subscribe to Freethink for more great stories
Subscription Center
Sections
Video
Freethink
Subscribe
We focus on solutions: the smartest people, the biggest ideas, and the most ground breaking technology shaping our future.
Subscribe