In the decades since Swiss scientist Albert Hoffman took the first LSD trip in 1943, the drug has been mostly synonymous with recreational use.

Recently, though, researchers have taken a renewed interest in its potential medicinal benefits, with various studies suggesting that the drug can help patients overcome anxiety, depression, and other mental illnesses when administered during a psychotherapy session.

But the effects of LSD can last upwards of 18 hours, and the fear of a bad LSD trip — one featuring terrifying hallucinations or feelings of doom — can make someone who might otherwise benefit from the drug loathe to try it.

Now, pharmaceutical startup MindMed is developing tech it believes could serve as an “off switch” for an LSD trip — giving you the ability to opt-out of a trip that takes a dark turn.

On April 1, MindMed announced an exclusive collaboration with a world-leading psychedelics lab run by Matthias Liechti at the University Hospital Basel in Switzerland.

Liechti was reportedly trying to figure out how LSD works when he stumbled upon what MindMed describes as an “LSD neutralizer.”

The company claims this substance can stop an LSD trip within 20 to 30 minutes — bringing a swift end to the hallucinations and other effects that could otherwise go on for hours and hours.

On April 21, MindMed announced that the pair had filed a patent application for the tech in the United States.

They now plan to see if they can develop it into a drug that could allow someone to shorten or even stop an LSD trip during a psychotherapy session.

The War on Psychedelics

The MindMed team’s tech might overcome one barrier to psychedelic-assisted psychotherapy — fear of a bad LSD trip — but the real hurdle to the treatment’s adoption is still the drug’s legal status.

LSD has been classified in the vast majority of countries as a Schedule 1 illegal drug for more than 50 years, ever since the adoption of the United Nations’ Convention on Psychotropic Substances.

An enormous opportunity has been lost, and we want to resurrect it.

That scheduling means regulators believe the drug has “no currently accepted medical use” — and according to scientists from Imperial College London’s Centre for Psychedelic Research, it’s had a hugely negative impact on LSD research.

“The Schedule 1 status of psychedelics led to vastly increased regulations on research, associated costs, and damaging stigma that likely deterred governmental agencies, other reputable funding bodies, and companies from backing the relevant research,” they wrote in a recently published commentary in the journal Cell.

The group is now urging regulators to reconsider their decades-long approach to LSD and other psychedelic drugs in light of the promising research that’s emerged in recent years.

“If we changed the regulations, we would have an explosion in this kind of research,” first author David Nutt said in a press release. “An enormous opportunity has been lost, and we want to resurrect it.”

If regulators heed that call, it could make it easier for MindMed to get its in-development tech out of the lab and into therapists’ hands, giving them a way to help patients without worrying about sending them on an hours-long bad LSD trip. 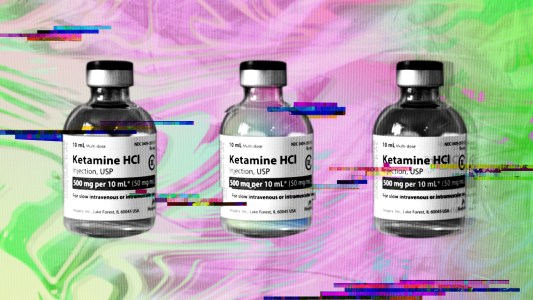 Drugs
Could VR change how you trip on ketamine?
By Sarah Wells
Subscribe to Freethink for more great stories
Subscription Center
Sections
Video
Freethink
Subscribe
We focus on solutions: the smartest people, the biggest ideas, and the most ground breaking technology shaping our future.
Subscribe