Launched into the cold English sea for the first time in 1511, the warship Mary Rose is forever linked to her commissioner, Henry VIII. The favorite of his warships, the Mary Rose’s three-decade reign was nearly in lockstep with her king’s.

The Mary Rose capsized during a battle with hundreds of invading French ships in 1545, slipping beneath the waves within minutes and taking almost all of the 500 crew members down to join the ship at the bottom of the Solent strait.

Raised from the deep in 1982, at great expense (and with great fanfare, as a global audience of over 60 million watched her ghostly rise), the wreckage of the Mary Rose is now stored at The Mary Rose Museum in Portsmouth, England.

The 500-year-old ship is an important artifact for learning about the shipbuilding and sailor life of the Tudor period. But as you can expect, centuries-old wood is also in danger of further deterioration, even in its specially-made home.

But a team led by the University of Sheffield has used a new technique to help keep what remains of the Mary Rose intact for future generations of researchers and romantics.

Using x-ray technology similar to the CT scan you may get in a hospital, the researchers were able to identify and map multiple compounds that are threatening to eat the ship’s wooden hull away at the molecular level.

“These developments mean that potential threats to the wood can be tracked – a vital step in developing conservation strategies for the future of the Mary Rose,” Serena Cussen, head of the materials science and engineering department at the University of Sheffield, said.

The last of its kind: Before the ship’s unfortunate demise, the Mary Rose was involved in various naval campaigns, sailing against the French (naturally) and Scots for 33 years.

In that time, the Mary Rose developed a reputation as being fast and formidable, with Admiral Edward Howard calling it “the noblest ship of sail of any great ship, at this hour, that I know in Christendom.”

The shipwreck was located in 1971. With backing from Prince Charles, the Mary Rose Trust was formed in 1979, with the intention of salvaging the entire ship.

On October 11, 1982, millions watched as a large chunk of the shipwreck’s hull — what remained of the ships’ ribs yawning open like a venus flytrap — and thousands of Tudor artifacts, as well as the crew’s remains, were salvaged from the sea

According to the Mary Rose museum, the ship is the only one of its kind left in the world.

While the shipwreck is valuable in helping archeologists and historians understand the history of naval warfare and shipbuilding in the Tudor period, it’s human treasures are even more important. Personal items like clothing, musical instruments, and bowls can give us insights into how people of the period lived, while their remains unlocked insights into their diets, diseases, injuries, and places of origin.

Saving history: As you may suspect from something that spent centuries under the sea, what remains of the Mary Rose is, despite preservationist’s best efforts, at risk of disintegrating. The ship is under constant threat from metal deposits in the wood and bacteria that release timber-eating acid.

As the captain and crew of the Mary Rose surely knew, you’ve got to see your enemy to fight them. But preservationists haven’t been able to know exactly what is inside the shipwreck’s wood — until now.

For their shipwreck scan, published in the journal Matter, the researchers used a new type of x-ray technique from the European Synchrotron Radiation Facility (ESRF).

“We have analyzed timber from the Mary Rose by way of a new technique that is somewhat comparable to how a hospital’s CT scanner works,” University of Copenhagen associate professor Kirsten Marie Ørnsbjerg Jensen said.

Unlike a normal CT scan, the researcher’s technique includes x-ray scattering. This allowed them to analyze the wood at the atomic level, so they could map and identify threats laced throughout it.

“It gives us information about what is contributing to the wood’s decay, so that it can be better preserved in the future,” Jensen said.

The Mary Rose is under constant threat from metal deposits in the wood and bacteria that release timber-eating acid.

The team was able to isolate and map several threats to the Mary Rose. Chief among them are nanoparticles of the acidic deposits of bacteria, called zinc sulfides.

“To find a way to stop these decomposition processes, it is important to know what the sulfides are composed of and where they are. This technique allows us to do just that,” Jensen said.

To help stop the shipwreck from degrading, compounds called organic polymers had been added to the timbers. If those polymers were to start breaking down, they would release damaging acids. With the x-ray technique, the team could spot and map these polymer deposits so that they can be tracked to ensure they don’t damage the ship.

Beyond the shipwreck: Archeological materials can be very complex, as centuries of deposits pile up within them. The new x-ray technique the researchers used to untangle this mess of compounds is “a really exciting advancement for the field of heritage science,” said Eleanor Schofield, deputy CEO of the Mary Rose Trust.

Being able to see what is inside the wood at an atomic level has discovered “a wealth of knowledge which we can use to further understand how the materials will react to certain treatments and environments and from that, devise future conservation strategies to keep them safe for years to come,” Schofield said.

Importantly, the x-ray scanning does not damage the material, making it an attractive option for future efforts to save human history.

“This x-ray method could also be used to inform strategies to preserve other important archaeological discoveries,” Cussen said.

Archaeology
Derinkuyu: Mysterious underground city in Turkey found in man’s basement
A basement renovation project led to the archaeological discovery of a lifetime: the Derinkuyu Underground City, which housed 20,000 people.
Up Next 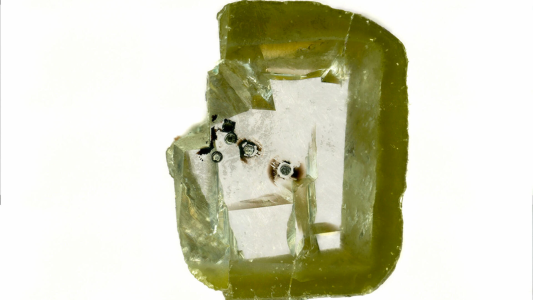 Scientists have discovered a new mineral that has never been seen before. The unearthed mineral was trapped inside the diamond.

Archaeology
Scientists discover a new mineral from the depths of the Earth
Subscribe to Freethink for more great stories
Subscription Center
Challenges
Video
Freethink
Subscribe
We focus on solutions: the smartest people, the biggest ideas, and the most ground breaking technology shaping our future.
Subscribe