When Maayan Harel paints a portrait, her subject isn’t sitting in front of her. She doesn’t even have a photograph to work from. Instead, she looks at clues from ancient human DNA.

Last month, scientists from the Hebrew University of Jerusalem made headlines when they revealed Harel’s portrait of a Denisovan, an extinct group of archaic humans that may have lived with Neanderthals.

The first Denisovan remains were discovered a decade ago in a Siberian cave. Since then, researchers have collected small fossils – teeth, a jawbone, a finger – but not enough to reconstruct an entire face or body.

So, they looked for clues in the Denisovan DNA. They homed in on epigenetic changes, heritable changes that influence gene activity and how a gene is expressed as a characteristic or trait. The expression of these traits are clues about what one possible Denisovan might look like. Science illustrator, Harel interpreted those clues to create a science-based portrait of the ancient human.

Freethink talked with Harel about the balance of artistic freedom and scientific accuracy.

Freethink: How is science illustration different from other portrait art?

Harel: An artist’s work is their own interpretation. But this portrait was entirely based on research, plus the artist’s interpretation when necessary. I didn’t think, “Oh, I want her to look like this.” Instead, I thought, “This is what we know, this is how to present what we know. This is the best possible representation.”

Even though this is not a picture of an actual Denisovan and this is what she (in particular) looked like, it’s the genetic analysis of one specific specimen, so it is based on one Denisovan. But the traits that they found are not individual traits. The results are more generalistic.

Freethink: What was the biggest challenge in creating a portrait based on DNA?

Harel: The biggest challenge was conceiving the whole way to do it. It’s a very unusual situation. In most reconstructions, you have a skull to work with. I’ve never encountered anything like this, and I think it’s pretty unusual – figuring out how to work from, basically, an Excel spreadsheet and bring something to life was really challenging.

It’s hard to put 3D (on) to 2D, because you have only a certain list of things that are known from the research, so a more appropriate solution was to sculpt. So I sculpted the skull, and then I put it in a dark closet so that I could simulate a cave, and photographed it. Then I painted it digitally in Photoshop.

Freethink: What kind of clues did the researchers provide?

Harel: I got a list of traits. One of the most unique traits is they had very wide parietal bones – the top of their skulls were quite wide. The other is that they had a very large dental arch and large teeth. I had a list of about 50 traits, and the skull was probably two-thirds of that. We knew those few traits about the skull, but we didn’t know anything else.

Once we had the sculpture of the skull, it was something that could be worked from. So if I know that the parietal bones are wider, I can expand them by hand. If I know the nose projection is somewhere between this and that, I can kind of adjust it.

Freethink: How accurate is the portrait?

Harel: It’s not accurate in the sense that it’s one particular girl. This portrait is meant to give a final possible face. Given that Denisovans are genetically very similar to Neanderthals, and there’s a lot of evidence that they lived alongside Neanderthals, we decided that anything that was unknown would be assumed (that) the trait is like the Neanderthal.

Part of the problem is, it sounds like you can now tell what a person looks like from their DNA. That’s not the case at all. Like modern humans, everyone is an individual. So a lot of effort was actually put into making a Neanderthal profile that would be as generalistic and quintessential and as “this is a Neanderthal” as possible. So, we could say: if we’re creating a general Denisovan and we’re assuming that what we don’t know is generally like Neanderthal, we have a good basis to work from. 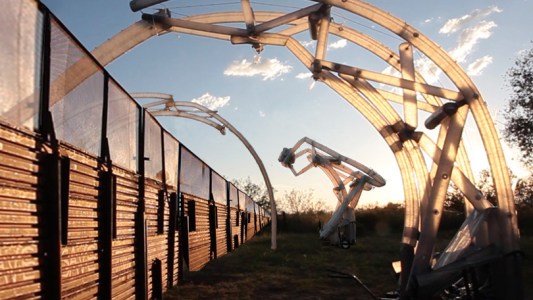 If all goes to plan, six robotic sculptures will arc across the border dividing El Paso and Ciudad Juárez in the fall of 2020.