Sitting on scrubby Arizona grass, with mountains in the distance, the sculpture faces an old border fence that once separated Naco, Arizona, from Naco, Sonora. At first, the sculpture appears like some kind of industrial machinery — maybe a muscular, braced crane tower — but instead of steel pipes, it is only a shell of inflatable plastic tubes.

The side of the fence facing the sculpture is ugly and utilitarian, all rust and corrugated metal. But with a hiss and a grind, air rushes in, filling the sculpture, lifting it above the fence, and then finally reaching and unfolding over to the other side like an octopus arm.

On the far side of the fence, what was once the Mexican side, is a graffito heart. One half is filled with the Stars and Stripes and the other with Mexico’s green, white, and red.

The surreal scene is a test run of Border Crossers, a series of sculptures by Chico MacMurtrie, a visiting artist at the Rubin Center for the Visual Arts at UT-El Paso. If all goes to plan, six sculptures will arc across the border dividing El Paso and Ciudad Juárez in the fall of 2020. The Rubin Center’s years of experience in staging cross-border exhibitions will help surmount the logistical and political barriers to MacMurtie’s installation.

MacMurtie’s practice has focused on robotics and performance art since the 1980s, and the Border Crossers fits his style well. He founded the art collective Amorphic Robot Works (ARW) in 1991, bringing together scientists, artists, and engineers to build interactive and robotic sculptures that reflect humanity. Collaboration and construction happen at ARW’s studio in Brooklyn and the border-abutting Amorphic Ranch in Arizona, where the Border Crosser took its test stretch.

The seeds of the project began a decade ago, when MacMurtrie started working on inflatable, architecture-scale robotic sculptures. A Photoshop of one of these sculptures into a section of the border wall from Naco, Arizona, sparked the idea to build robotic sculptures that could cross borders. A self-identified Irish-Mexican, the project has personal meaning to MacMurtrie, who grew up a stone’s throw from the border. He’s seen the border wall of his youth moved and replaced with a more formidable version crowned with razor wire. Wire, political ire, and troops on the border — it is a different place now.

“(I) watch(ed) from afar as that border region got militarized,” MacMurtrie says, adding that the transformation of the border defined his childhood.

The Line is Much More Flexible

So far, four Border Crossers have been built, says Luise Kaunert, Managing Director of ARW. Initially supported by a Guggenheim Fellowship, the sculptures have taken shape in workshops at the University of Michigan and the University of Applied Art in Vienna. Two Border Crossers currently reside in Munich and Vienna, and they are scheduled to touch across a section of the Berlin Wall this November: one from the east and another from the west.

Collaboration is an important part of MacMurtrie’s practice; as part of the El Paso/Juárez exhibit, MacMurtrie plans to hold workshops with locals, on both sides of the border, who will complete the final two Border Crossers.

To make MacMurtire’s 2020 vision a reality, practical and political problems will need to be solved. A stretch of border wall that can be approached by land on both sides will be essential, and relationships built over the years by the Rubin Center with artists, Border Patrol agents, and authorities in both Mexico and the U.S. will need to be utilized.

“We have strong relationships with them,” Kerry Doyle, the director of the Rubin Center, says of their local partners in Juárez. “They’re friends, and they’re colleagues.”

El Paso and Juárez are intricately linked, says Doyle, who has lived on both sides of the border since the 1990s. She feels that the cities are close, not just physically but also culturally. People move regularly across the border for work, to visit family and friends, and for shopping and services. For Doyle and other residents of the borderlands, the line is much more flexible than the media would have us believe.

“El Paso is being defined by outsiders,” Doyle says, “and that happens both through the media and through policy.”

National policy has a unique impact on everyday life: the wait time to cross the border, for example, can be changed at a whim from Washington, deeply impacting daily life and work for many citizens. Doyle believes art like Border Crossers can help people see these aspects of life on the U.S.-Mexico border that may not resonate in other ways.

“Artists have the ability to freeze experiences in a way that resonates,” Doyle says. “Sometimes it resonates more than facts or figures or anecdotes.” 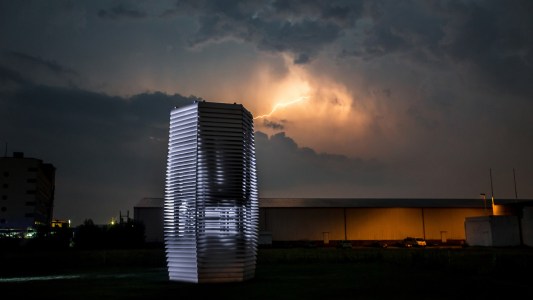 From towers that create pockets of clean air to a luminescent bike path that glows like children’s ceiling stars, Daan Roosegaarde’s entire practice is centered around the beauty of living with nature and removing pollution from urban life.