More than 50 years ago, three scientists won the Nobel Prize in chemistry for being the first to model DNA, the code that writes the instructions for life.

Now, two scientists have earned the same distinction for co-developing CRISPR, a tool for precisely rewriting that code in living organisms — and the only thing more remarkable than what’s already been done with CRISPR might be what scientists will be able to do with it in the future.

Each year, the Royal Swedish Academy of Sciences awards the Nobel Prize in chemistry to a scientist or group of scientists to recognize a major contribution in the field — it’s widely considered one of, if not the, most prestigious honors a scientist can receive.

On October 7, the Nobel Committee announced that it had chosen Emmanuelle Charpentier, director of the Max Planck Unit for the Science of Pathogens, and Jennifer A. Doudna, a biochemist at the University of California, Berkeley, as the recipients of the 2020 prize for their development of the gene-editing tool CRISPR.

This tool allows scientists to make snips in strands of DNA, enabling them to edit specific genes by cutting, removing, or adding DNA.

The technology has led to groundbreaking new research in how we approach diseases with a genetic cause — over 100 clinical trials are being conducted using CRISPR in treatments for genetic diseases.

Already, CRISPR scientists have made strides in using the tool to treat (or even cure) diabetes, cancer, drug addiction, infertility, and sickle cell anemia.

Many scientists have contributed to the development of CRISPR, but Doudna and Charpentier have been recognized for turning it into a very precise and easy-to-use tool. While there are other gene-editing tools out there, it’s CRISPR’s precision and ease of use that makes the tool so promising.

The duo’s groundbreaking research was first published in 2012. The win is also notable because it’s the first time an all-female team has won the prize.

Aside from human healthcare, CRISPR is being used to advance other fields, too.

Armed with the gene-editing tool, some scientists are now engineering mosquitoes that are less likely to spread deadly diseases, such as malaria. Others are editing the DNA of crops to help them withstand pests, drought, and other threats, while also making them taste better.

CRISPR has taken the life sciences into a new epoch.

However, the tool has also raised enormous ethical questions — especially when Chinese scientist He Jiankui announced in 2018 that he had gene-edited embryos to try to protect against HIV. His work was largely regarded as unsafe because of the risk of causing unintended genetic changes in future generations.

While there is always the risk of abuse with any technology, the potential benefits of CRISPR have already proven to be enormous.

“These genetic scissors have taken the life sciences into a new epoch and, in many ways, are bringing the greatest benefit to humankind,” the Nobel Committee wrote in its announcement.

Clean Energy
A groundbreaking solution could unleash our hydrogen future
German researchers have created genetically engineered bacteria that can rapidly store and release hydrogen fuel.
Up Next 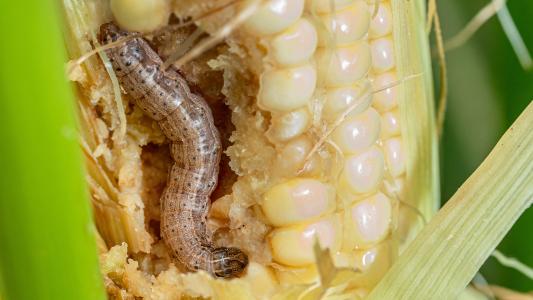 The fall armyworm is devastating African agriculture, eating millions of pounds of crops. Can a genetically modified version control their advance?