Even with the best fly-swatter skills, a buzzing insect is hard to pin down. Flies can hover, fly sideways and backward, and land upside down.

The acrobatics of flying insects has captivated scientists for decades, but much of the physics of insect flight remains a mystery. The tiny critters are just too damn fast.

But now there is a robot that can keep up.

Researchers from the CNRS, Université de Lorraine, and Inrae built the first cable-driven robot that can follow the movement of free-flying insects. With the robot — essentially a box with cameras, suspended by cables — researchers can capture videos or photos of natural flight behavior right alongside the insect.

Insects might be the most advanced aerialists in the world. They were the first organisms to evolve flight. Most flies flap their wings 200 times each second. Mosquitoes beat theirs three times as fast — so fast they make that pesky humming sound. Mosquitoes can fly about 1.5 mph, while a dragonfly can reach speeds up to 35 mph.

Up until now, researchers had to study their flight using a stationary camera to capture take-off or landing. Some scientists tethered flying insects to a central location, called a flight mill, which allows them to measure flight capability, like speed or distance, in a circular path.

In 2002, Michael Dickinson, a biologist at UC Berkeley captured some of the fly’s agility using high-speed video cameras. He filmed the fly doing a maneuver called a saccade — a very rapid body turn. With the high-speed footage, Dickinson was able to break down the maneuver’s elements. Then, in 2014, scientists from the University of Oxford tethered a blowfly to a vertical mount and used x-rays to film inside its body during flight.

But to follow the irregular pattern of flying insects from take-off to landing and anywhere in between — well, it is no small task. This new robot could change that.

The researchers tested their robot with the Agrotis ipsilon, a common migratory moth found on nearly every continent. They equipped the robot with cameras and a controller to minimize tracking errors and followed the 2 cm moth up to a speed of 3 meters/second.

Their work, published in Science Robotics on 10 June, will help scientists understand flying insects’ locomotion and orientation strategies and how visual, olfactory, and other senses stimulate flight behavior. 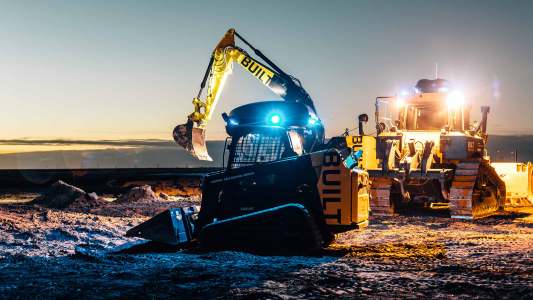 Innovation in the construction industry has been stagnant for decades, but the use of construction robotics could radically alter the way we build.