Boston College researchers have found yet another outside-the-box way to get meat.

In 2017, they stripped away the plant cells on a spinach leaf and grew beating heart tissue on the skeleton of plant veins that remained.

Now, they’ve used one of those spinach skeletons as an edible scaffold for lab-grown meat.

Interest in meat alternatives has soared, as people look for more humane, sustainable ways to satisfy their cravings for beef, fish, and chicken.

While some startups are developing meatier plant-based products, others are experimenting with lab-grown meat, also known as cultured meat.

Because these foods are grown from animal muscle cells, they’re molecularly identical to meat that comes directly from livestock — that makes them a better flavor match than anything made from plants.

One of the challenges to growing meat in the lab, though, is that the cells need something to grow on.

“Muscle cells are anchorage dependent, meaning they need to grab on to something in order to grow,” researcher Glenn Gaudette said in a news release.

Some scientists are experimenting with scaffolds made of gelatin, while others are using soy proteins. However, there isn’t yet any sort of consensus on what makes the best base for lab-grown meat — we need something cheap, easily scalable, and, most importantly, edible.

Now, Boston College is throwing spinach skeletons into the mix.

The plant cells were first removed from the spinach leaves using detergents — that part was straightforward since the researchers had already done it for their heart muscle study.

The spinach skeletons were then seeded with cells sourced from cow tissue. At 14 days, more than 98% of the cells were still viable, and they’d differentiated into muscle mass.

This demonstrates that spinach skeletons could be a cost-efficient, environmentally friendly base for lab-grown meat, the researchers write in their study — but they aren’t done experimenting just yet.

“We need to scale this up by growing more cells on the leaves to create a thicker steak,” Guadette said. “In addition, we are looking at other vegetables and other animal and fish cells.”

Food
The future of meat is sustainable — and a little weird
Ideas to reduce the meat industry’s impact on the environment include 3D-printed steaks, cultivated tiger meat, and potty-trained cows.
Up Next 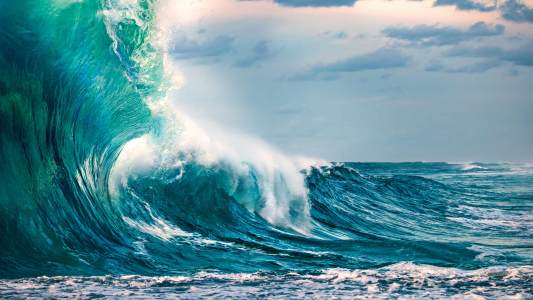 Sustainability
What is the future of wave energy?
Subscribe to Freethink for more great stories
Subscription Center
Challenges
Video
Freethink
Subscribe
We focus on solutions: the smartest people, the biggest ideas, and the most ground breaking technology shaping our future.
Subscribe