Pop! Pop! Pop! It’s 4 a.m. in East Dallas, and gunfire fills the air. On a dead-end street, with bullets flying, a car rolls to a stop.

The car’s passengers fling open the doors, hurdle a nearby fence, and scatter into the night.

Up the street, Antong Lucky, a local leader of the Bloods gang, watches in disbelief as the car — his getaway car — is abandoned, deep in Crips’ territory.

“I’m like, ‘What the hell is going on?'” He is out of ammunition, and the driver — his friend Will — and the rest of his backup have vanished. “So, I’m running. I’m running with an empty gun.”

Later that morning, Antong says, “We had got the call that they had found Will slumped over in the car on that street.”

He died of a gunshot wound to the back of the head — “friendly fire,” it turns out, from one of the Bloods firing across the car.

Will wasn’t a Blood — he was in college and had enrolled in ROTC. “He was doing everything you supposed to do,” Antong says. But on that night, Antong saw Will driving home from work and flagged him down. The Crips had just conducted a drive-by shooting in their neighborhood, and the Bloods were desperate to strike back.

And Will decided to give his friend a ride.

Will died in October 1993. Now, 26 years later, Antong walks that dead-end street for the first time since his friend’s death.

“It was this street right here. I remember now. Right about right there.”

Antong looks on, remembering its grisly past. He pauses.

“So that’s why we do stuff that we do — trying to make a difference.”

The man next to him nods. “Can’t erase that or take it back, but we can stop somebody else from doing the same thing, man.”

That man, Def D, wasn’t there the night Will died — but his gang was the target of their revenge. He was a local Crips’ leader.

“Man, nothing come out of this but death and prison.”

Now, the two men who grew up shooting at each other are on a mission to help Dallas’ young people escape gang violence.

Antong and Def D had nearly identical childhoods: both were raised in underprivileged neighborhoods in Dallas, both experienced gang violence at an early age, and both had family members who were in gangs.

There was, however, one notable difference: they were raised one mile apart, in different neighborhoods. This mile meant the difference between friend and foe: Antong was in the Bloods’ territory, and Def D was in the Crips’.

“You couldn’t pull in this neighborhood if you from my neighborhood,” says Antong, standing on Def D’s old street. “And we tried to come over many times, sneak over here. Man, it’s just like they knew. It would be (constant) gunfire whenever we tried to come through here.”

During the 1990s, both men rose through the ranks in their respective gangs. Both lost friends to the gang wars. Both were sentenced to prison. And, in prison, both came to recognize the devastation that gang violence was wreaking on young people and their families.

“Man, nothing come out of this but death and prison,” says Def D.

Def D was still behind bars when he got wind that Antong had been released and was back on the streets. This time, however, Antong was trying to be a positive role model for kids, working as a mentor at a local middle school.

At first, Def D was skeptical of his rival’s aboutface. “But I’m steady seeing what (he’s) doing, steady watching him, steady seeing him doing good stuff.”

He wanted to know, could he turn kids around the way Antong was doing? When he got his release from prison, he met up with his old enemy.

The two men who grew up shooting at each other are on a mission to help Dallas’ young people escape gang violence.

Antong helped create OGU (Original Gangsters United), so that his former rival could help protect youth from falling into the same cycle of violence that they — now older and wiser — knew would cost them friends, families, and years of hard time.

Today, OGU has grown beyond Antong and Def D — other former gang members are now committed to stopping gang violence on the streets.

OGU mentors spend their days hanging out with Dallas youth, looking for kids at risk of gang violence — or, rather, those most in need of a positive relationship in their lives.

This type of outreach is called “street work,” meeting at-risk youth where they’re at — on the streets, in schools, jails, or homeless shelters — to try and guide them onto a more constructive path in life. Street workers are often former gang members, like Antong and Def D, who know firsthand the pain that gangs can cause.

“The OGU effect is to catalyze these OGs to do the work themselves.”

Part of what’s unique about OGU, however, is the relationship that Antong and Def D share. They’re a real life example of how two people from different neighborhoods can forge a meaningful relationship and use their common experiences to do good for others.

“It makes (the kids) say, ‘Wait. If they can get along, then why am I having problems with somebody?” says Antong. “One day, the person that I’m having a problem with from another neighborhood, may be my best friend, or maybe my brother like Def. Why we beefing? Let’s skip that process and become friends.”

OGU mentors have reached over 470 youth this year. The organization officially launched this past January, but Antong says he is already seeing positive results — the majority of the kids they mentor avoid further engaging in gang violence.

One of the reasons they’re able to be successful is because they train the youth they mentor to continue the good work. They want these “OGU Grads” to help their peers avoid gang violence, too. Oftentimes, says Antong, these individuals are not looked at as people who can have solutions for stopping violence. But OGU is changing that.

“There are 92 OGU Grads who are reaching the young people,” says Antong, “The OGU effect is to catalyze these OGs to do the work themselves.” That work includes street outreach as well as gang mediation. This method allows OGU to go national, too. So far, they have one cohort in Baton Rouge and one in Atlanta.

Antong and Def D also say that relating to the youth is crucial to a successful mentorship.

“It’ll Be a Miracle If Y’all Can Change Her”

While OGU was just officially launched this year, Antong and Def D have been conducting street work for years before turning it into a full-blown training program. They can recall the names of numerous kids they’ve mentored who have escaped the cycle of gang violence.

Monica is one of those kids.

“When we met her,” recalls Antong, “the Juvenile Department said to us that ‘there wasn’t nothing you can do with her. It’ll be a miracle if ya’ll can change her.’”

“She was a little pretty girl, but she was violent,” says Antong. She had stabbed people. He and other mentors started intensive case management with Monica, and, in six months, a “miracle” happened — she did a complete turnaround, says Antong.

Intensive case management is when a person needs around the clock service. This management consists of phone call check-ins, home visits, school visits etc. The youth are given the mentor’s cell phone number and told to call them at any time if they find themselves in need of support.

Case management is a two-way street, though. Antong wants the youth to be involved with deciding how to solve the issues they are facing. He’s made this philosophy a cornerstone in OGU. “We help to develop a IPP (Individual Program Plan) to help youth guide decisions and actions towards an agreed upon goal.”

A few months ago, Monica reached out to Antong. Today, she’s married, has two kids, and a college degree.

AJ is another success story.

When Antong met AJ, he was in a gang. But Antong and other mentors kept talking with him, chipping away at his hard exterior. He was also under intensive case management.

“I knew he was a good kid but his neighborhood was toxic, his friends were toxic and he needed a structured fresh start.” During one conversation, Antong suggested that AJ remove himself from the temptation of the streets by joining the Army.

“About a year ago, he called me, let me know that he was stationed in San Antonio.”

AJ is now a sergeant in the Army, a husband, and a father to his daughter.

Antong continues to rattle off other names of kids who have left the streets for bigger and better things.

“It’s all about us pitching in and saying, ‘Little-by-little, piece-by-piece.’ How can we prevent kids from having a boxed-in reality? How can we just open up the box and let their success be whatever they determined it to be? That’s why I do this work.” 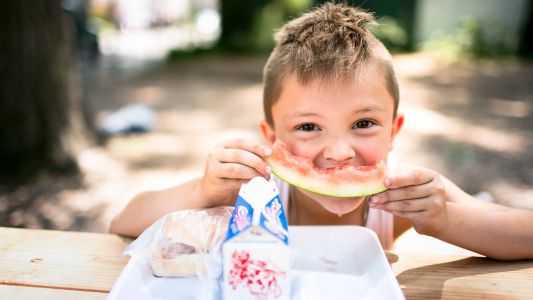 A group of culinary professionals in Chicago is volunteering their talents to end child hunger in the US, and some are going all the way to Capitol Hill.