Scientists from MIT, Caltech, and several other institutions have discovered a super-dense collapsed star cannibalizing another star, while a third star orbits the pair from a huge distance — a first in astronomy.

Black widow pulsar: At the end of its life cycle, a massive star explodes as a supernova. Depending on its original size, its core then collapses into either a black hole or a super-dense neutron star — we’re talking the mass of our sun packed into an area the size of a human city.

Pulsars are one type of neutron star. They rotate quickly while beaming radiation in opposite directions. If those beams cross our line of sight, they make the star appear to pulse — similar to how the light from a lighthouse appears to flicker to sailors at sea.

A black widow pulsar is a star that steals matter from another nearby star while they orbit each other. The constant blast of radiation from the pulsar causes the side of the companion star facing it (the “day” side) to be significantly hotter and brighter than the other side (the “night” side).

A different approach: About two dozen black widow binary star systems have been found in our Milky Way by looking for the pulsar’s flashes of gamma and X-ray radiation.

But a new study, published in Nature, took a different approach.

“I thought, instead of looking directly for the pulsar, try looking for the star that it’s cooking,” said study author Kevin Burdge.

“This system has probably been floating around in the Milky Way for longer than the sun has been around.”

They sifted through telescope data for stars whose brightness changed drastically (by a factor of 10 or more) every hour — that was what they expected a companion star to look like from Earth as it got cooked by a black widow pulsar.

Using that method, they were able to identify a dozen known black widow binary star systems. They also found a new star whose brightness changes by a factor of 13 every 62 minutes — suggesting that it is being feasted upon by a previously unknown black widow pulsar.

Special system: The way this black widow binary was detected is just one of several things that’s unique about it. Its 62-minute-long orbital period is also shorter than any known system, and the whole thing is being orbited by a distant third star every 10,000 years.

“It was crazy, because every step of the way, it just kept getting weirder,” Burdge told Vice. “We kept finding out new facts about it, like it is in a wide triple. We were like: ‘Really, in a triple? No known black widows are in a triple.’”

It’s not clear how the three stars came to form this system, now known memorably as “ZTF J1406+1222” — but MIT suspects that they started out in a dense cluster of stars that was torn apart by the supermassive black hole at the center of the Milky Way.

“It’s a complicated birth scenario,” said Burdge. “This system has probably been floating around in the Milky Way for longer than the sun has been around.”

Looking ahead: The team hasn’t confirmed their black widow pulsar using the ol’ reliable methods of gamma or X-ray detection, so for now, it’s just a candidate. They plan to study it further and use their optical method to hunt for more systems.

“The one thing we know for sure is that we see a star with a day side that’s much hotter than the night side, orbiting around something every 62 minutes,” said Burdge.

“Everything seems to point to it being a black widow binary,” he continued. “But there are a few weird things about it, so it’s possible it’s something entirely new.” 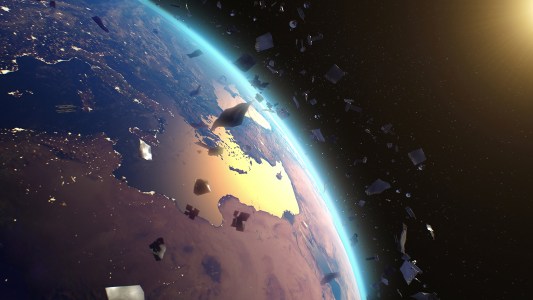 The US Space Force is giving 125 teams up to $250,000 each to develop tech to deal with the orbital debris circling our planet.