The US Space Force is turning to private business for help in taking out the orbital debris circling our planet, endangering our spacecraft and our astronauts.

The challenge: Earth is surrounded by millions of pieces of orbital debris. Also known as “space junk,” these are now useless objects humans sent into space but never removed, ranging in size from entire defunct satellites to flecks of paint from rockets.

Because orbital debris is moving at a speed nearly 10 times faster than a bullet, something as small as a screw could cut through an operational spacecraft — potentially leading to the loss of a satellite or, worse, the life of an astronaut.

Orbital Prime: In an attempt to avoid such scenarios, SpaceWERX, the US Space Force’s innovation arm, launched Orbital Prime — a program to fund the development of private businesses’ ideas for orbital debris mitigation tech — in November 2021.

“Our vision in this partnership is to aggressively explore those capabilities with you today in the hope that we and others can purchase them as a service in the future,” David D. Thompson, the Space Force’s vice chief of space operations, said of the program.

Even a tiny piece of orbital debris could cut through an operational spacecraft.

What’s new? SpaceWERX has now selected 125 teams, from business, academic, and nonprofit groups, to receive $250,000 to further develop their designs during Phase 1 of the program.

Brian Holt, co-leader of Orbital Prime, told SpaceNews that the groups are a mix of startups and traditional defense companies spread across 27 states, and while he didn’t say how many proposals the program received, he did note that the response exceeded expectations.

Looking ahead: Each team chosen for the Orbital Prime program will now have about five months to work on their design before they must present a product or study to SpaceWERX.

Later in 2022, chosen teams will have a chance to secure up to $1.5 million to develop prototypes of their tech in Phase 2 of the program. In two to four years, SpaceWERX hopes to actually send one or more of these new technologies to space for a demonstration.

The big picture: While it’s too soon to say what sorts of technologies for managing orbital debris will emerge from the Space Force program, we’ve already seen several potentially viable options demonstrated in space.

In February 2022, China’s space agency used a space tug to drag a defunct satellite into a “graveyard orbit” where it’s unlikely to collide with active spacecraft. In 2018, UK’s Surrey Space Center led a demo that used a net to catch a simulated piece of orbital debris (one that it had released).

Other groups have come up with ideas for repurposing space junk into labs for astronauts or fuel for small satellites. While those have yet to be demonstrated in space, they’re particularly alluring solutions as they would allow us to not only get rid of dangerous orbital debris, but gain something useful in the process. 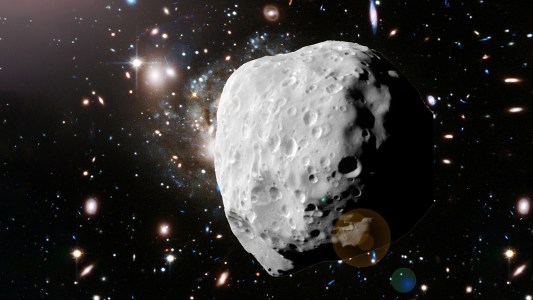 As part of its new planetary defense strategy, the China National Space Administration is going to launch a mission to redirect an asteroid.

Asteroids
China is going to try to move an asteroid
By Kristin Houser
Subscribe to Freethink for more great stories
Subscription Center
Sections
Video
Freethink
Subscribe
We focus on solutions: the smartest people, the biggest ideas, and the most ground breaking technology shaping our future.
Subscribe