Space junk is a big problem, and new thruster technology could help solve it.

In particular, South African startup Hypernova Space Technologies has developed a metal-fueled propulsion system for small satellites. If it passes an upcoming test, it could be a game-changer for space exploration.

The trash problem: Thanks to decreasing launch costs and smaller, cheaper designs, the number of satellites orbiting the Earth is expected to increase dramatically in the near future — SpaceX alone plans to deploy nearly 30,000 for its internet-beaming Starlink constellation.

“Most satellites are simply computers that are tossed out the side of a rocket [that] are tumbling in space.”

These small satellites could help democratize access to space and end the digital divide. However the more satellites we have in Earth’s orbit, the more likely they are to collide — and that’s a huge problem.

“Whenever a satellite sheds pieces, they tend to not shed one, but many, many pieces, hundreds of thousands of pieces depending on the type of collision,” aerospace researcher Moriba Jah told NPR in 2020.

Those bits of debris can then collide with other small satellites or spacecraft. Since those bits are moving nearly 10 times as fast as a speeding bullet, even something as small as a rogue screw can cause serious damage.

The big solution: If we could control the movement of small satellites, we might be able to prevent collisions between them. At the very least, we’d be able to send inactive satellites into the Earth’s atmosphere to burn up.

But because the allure of these satellites is that they’re small and cheap, any propulsion system for them would need to be small and cheap, too — and because developing such systems has been a challenge, satellite builders typically launch without them.

“Most satellites are simply computers that are tossed out the side of a rocket [that] are tumbling in space,” Hypernova CEO Jonathan Lun told BBC News.

Perhaps the most exciting aspect of the system, though, is that it doesn’t burn liquid fuel to create thrust (like most propulsion systems). Instead, it vaporizes a solid metal to produce a jet of plasma designed to propel the satellite.

“All rocket fuel so far has been these really expensive, rare, and dangerous fuel sources, and we’re going to flip that totally around and say let’s use something as common as metal as a fuel source,” Lun told Fast Company.

Hypernova’s approach is safer, according to Lun, because the metal is non-toxic and very unlikely to cause an explosion prior to launch, unlike typical fuel sources.

Hypernova can also load the metal fuel prior to shipping each propulsion system, saving satellite launchers from having to fuel up at the last minute (like they currently have to do with liquid or gas propellants).

Tillemans says that Hypernova’s propulsion system has already proven itself in tests on Earth, working in a vacuum at high temperatures. The ultimate test will come next year, when one of Bulgarian company EnduroSat’s small satellites will launch with a Hypernova propulsion system attached.

If it works as hoped, Hypernova’s system could one day find its way into larger satellites or spacecraft. Looking even further ahead, it could be possible to use metals mined from asteroids — or even space debris itself — to refuel those craft in space.

But even Phase Four’s own CTO Umair Siddiqui acknowledges the need for better fuels.

“We are using xenon for our initial customers, but the future … xenon supply chain does not scale to where low-Earth orbit smallsat constellations are going,” he told Space News. “We need to be able to bring online new capabilities with newer propellants.”

If Hypernova’s metal-powered thrusters can prove themselves in space, they could be the alternative needed to not only support the growing small satellite market, but maybe even usher in a new era in more distant space exploration.

“[I]f we can now switch over from rare expensive liquids and gases as fuel sources, to move stuff around in space with cheap and abandoned iron ore or other metals, it changes the game completely,” Lun said. 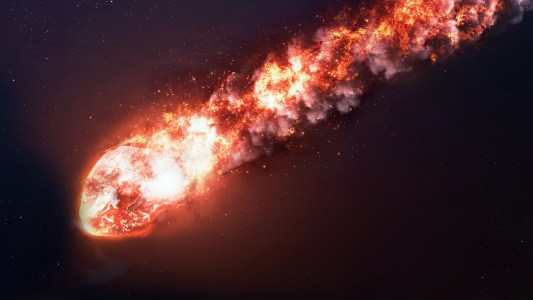 Asteroids
“Pulverize It”: The plan to slice and dice space rocks
By Kristin Houser
Subscribe to Freethink for more great stories
Subscription Center
Sections
Video
Freethink
Subscribe
We focus on solutions: the smartest people, the biggest ideas, and the most ground breaking technology shaping our future.
Subscribe