Meteors enter our planet’s atmosphere on a daily basis. Although most of them will harmlessly burn up in the atmosphere, they occasionally impact Earth’s surface at colossal speeds. While most of these impacts occur far from civilization, the shockwaves they generate can pose a serious threat to anyone unlucky enough to be caught in the vicinity of an impact, and can completely transform natural environments.

In 1908, for example, the Tunguska event in Siberia — thought to be a massive explosion caused by an asteroid — flattened an estimated 80 million trees across over 2,000 square kilometres of forest. In 2013, another meteor burst near the city of Chelyabinsk, also in Russia – leading to thousands of injuries and damaged buildings. Luckily, larger impacts, created by meteors tens of meters across, are rare – likely only occurring roughly twice every millennium.

Meteors enter our planet’s atmosphere on a daily basis. Although most of them will harmlessly burn up in the atmosphere, they occasionally impact Earth’s surface at colossal speeds.

But to better prepare for these impacts, it is important for researchers to understand how often they have struck in the past, and how they affected the environments surrounding their craters.

This is easy enough for astronomers studying other rocky worlds. Look up at the Moon, for example, and we can see a record of meteor impacts spanning billions of years of its history – kept intact by a lack of erosion from atmosphere or geological activity.

Yet on the far more dynamic surface of our planet, such a task is far more challenging. To distinguish smaller impact craters from other geographical features, researchers need to search for more subtle clues that an impact has occurred – much like a forensic scientist gathering evidence from a crime scene.

Forensic evidence: Existing methods for identifying evidence of these impacts include searching for atomic-scale deformations in quartz, and detecting minuscule traces of extraterrestrial material in the ground.

Such subtle clues can be extremely difficult to find when craters are less than 200 meters across, ultimately meaning that out of all the smaller impact craters researchers have predicted have happened since the end of the last Ice Age, only around 30% have actually been located.

One international team of researchers has now proposed a new method for mapping out these craters. The forensic clue is charcoal — a carbon residue formed from heated wood and plant matter. Crucially, the reflectivity of charcoal can offer valuable information about the conditions in which it formed.

This property has already been widely used to study wildfires, the most common source of charcoal in nature. Less reflective charcoal could indicate that the fire mainly took place in a tree canopy, where fire can reach up further than in shrubs and leaf litter, where fuel is less abundant.

Expanding on this idea, a team led by Ania Losiak at the Polish Academy of Sciences suggested that charcoal should also be created at the rims of impact craters, where shockwaves traveling through the ground deliver short bursts of heat following asteroid impacts.

Unique charring: To test this idea, Losiak and her colleagues dug trenches at the rims of 4 known impact craters, spread across Estonia, Poland, and Canada, and then examined the reflectivity of the charcoal particles they found.

They discovered that the reflective properties of the charcoal found at each crater were remarkably similar, despite the fact that the impacts had occurred thousands of years apart, and in completely different environments.

One international team of researchers has now proposed a new method for mapping out these craters. The forensic clue is charcoal.

This discovery stood in stark contrast to the charcoal created in wildfires, which can spread in a diverse array of conditions, meaning its reflectivity can vary widely. This suggested that heating at impact craters unfolds in a fundamentally different way to that in wildfires: an insight which could have important implications in the search for as-yet undiscovered craters.

Preparing for future impacts: By searching for charcoal with similar reflective properties, Losiak’s team hopes that researchers could finally gain the forensic clues needed to identify many more of the impact craters that have formed since the last Ice Age.

This could provide valuable information about the meteors that created them – allowing researchers to better understand how often small impacts occur, and their influence on natural environments. In turn, this could help us to better prepare for when meteors may strike in the future. 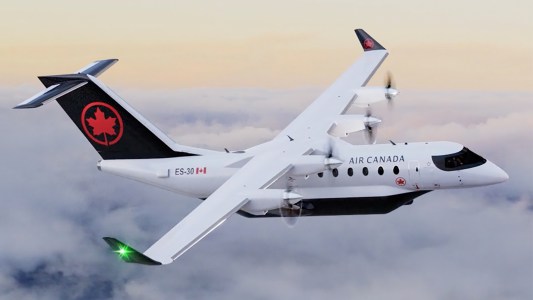 Flag carrier Air Canada has announced plans to have electric-hybrid planes on regional and commuter routes by 2028.