To date, NASA has successfully landed four rovers on Mars. On July 30, it’ll launch what it hopes will be the fifth: Perseverance.

Here’s what you need to know about the Mars 2020 rover launch, including why this Mars mission is a big deal and how you can watch it live online.

Why Is This a Big Deal?

Perseverance will be the first rover to collect samples of Mars, which will be brought to Earth at a later date so that scientists can study them for signs of past life on the planet.

Ultimately, NASA hopes that the knowledge gleaned from Perseverance could help it overcome the challenges of sending humans to Mars — which it hopes to do by the 2030s.

“The Mars 2020 rover will help us understand the current weather, winds, radiation, and dust environment (on Mars),” the agency wrote, “and will demonstrate technologies that will help humans once there.”

One of the technologies that Perseverance will test is Ingenuity, a solar-powered helicopter that will attempt the first controlled flight on another planet.

Perseverance is scheduled to reach the red planet on February 18, 2021, after a 309-million-mile-long trek.

The Mars 2020 rover will then explore the planet for at least one Martian year (about 687 Earth days). However, other rovers have remained operational far longer than expected — Opportunity’s 90-day Mars mission, for example, stretched out to almost 15 years.

When/How Can I Watch?

NASAs will begin streaming live coverage of the Mars 2020 rover launch on July 30 at 7 a.m. EST. You can watch that via YouTube or the video embedded below. 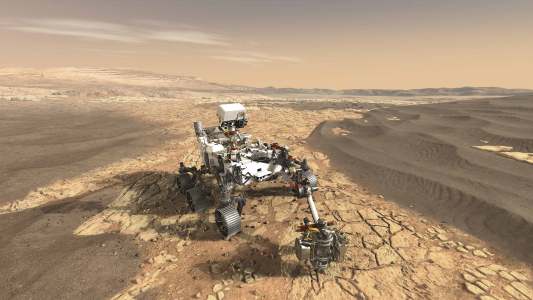 When Perseverance lands on Mars, it will hopefully drive further faster than any rover before. NASA’s autonomous vehicle’s secret? A dedicated “pilot.”