China is now the third nation to discover a new moon mineral, and it contains an element that could one day power successful nuclear fusion — the holy grail for near-limitless clean energy.

Pay dirt: Minerals are naturally occurring crystals that are made of elements. Earth is home to more than 5,000 types of minerals, including ice, silicon, and diamond, and many minerals found on Earth have also been spotted on the moon.

Few new minerals have been discovered on the moon, though.

The US and the former Soviet Union have found five, and the International Mineralogical Association has now confirmed that the China National Space Administration (CNSA) has discovered a sixth moon mineral: Changesite-(Y).

The new moon mineral: In December 2020, the CNSA’s Chang’e 5 mission landed on the moon, collected 3.8 pounds of lunar material, and then returned the samples to Earth, marking the first retrieval of moon material since the 1970s.

The CNSA distributed small samples of the lunar material to nearly 100 groups for analysis, and a team from the Beijing Research Institute of Uranium Geology (BRIUG) managed to isolate a single particle of Changesite-(Y) from its sample.

The particle is only about one-tenth as wide as a human hair, and the BRIUG team had to use high-tech processes to isolate the new moon mineral from the more than 14,000 other particles in their sample.

Changesite-(Y) contains helium-3, which is an attractive option for fueling nuclear fusion reactors.

Why it matters: The discovery of a new moon mineral can deepen our understanding of the moon’s history and current composition. The discovery of this particular mineral, however, may have a more direct impact on life on Earth.

The chemical composition of Changesite-(Y) contains helium-3, an isotope of helium that’s rare on Earth, but thought to be abundant on the moon — some estimate there could be as much as 1.1 million metric tons of it in the first several meters of the lunar surface.

Because helium-3 is non-radioactive, it’s an attractive option for fueling nuclear fusion reactors — and right now, even if we are able to figure out how to turn nuclear fusion into a viable source of clean energy, our current fuel options on Earth are in short supply.

If we could mine helium-3 on the moon — perhaps by identifying places where Changesite-(Y) is most abundant — we could power the US for a year with just 40 metric tons of the isotope. One of SpaceX’s in-development Starships could carry that much to Earth with plenty of room to spare.

“Of the various volatile materials available on the moon, there is potentially only one that has significant value back on Earth,” said Aaron Olson, a NASA Space Technology Research Fellow, in 2015. “Helium-3, if used as fuel in a nuclear fusion reactor, could become a significant lunar export for power generation around the world.”

The big picture: For that to happen, we need to figure out where to find large caches of helium-3, then figure out how to effectively mine it on the moon. And even if we can then return it to Earth, we can’t use it to create clean energy until we actually master fusion — which some say will never happen.

Still, with so many teams working to bring both moon mining and usable nuclear fusion to fruition, it seems we just might be able to make this dream of limitless clean energy a reality within the foreseeable future — and the discovery of Changesite-(Y) could mark a pivotal moment in that journey. 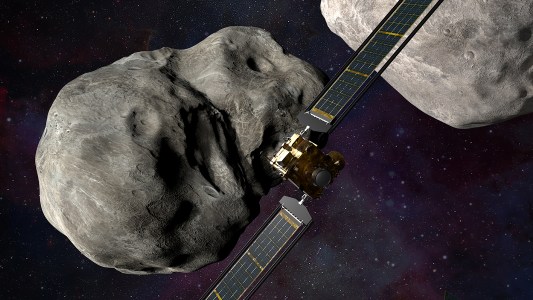 The DART spacecraft is now close enough to image the asteroid system it plans to slam into as part of NASA’s planetary defense efforts.

Asteroids
NASA’s DART spacecraft is about to smash into an asteroid
Subscribe to Freethink for more great stories
Subscription Center
Sections
Video
Freethink
Subscribe
We focus on solutions: the smartest people, the biggest ideas, and the most ground breaking technology shaping our future.
Subscribe