NASA wants to learn everything it can before sending astronauts back to the moon in 2025 — so it’s cracking open a sealed sample of moon rock collected 50 years ago.

The backstory: Between 1969 and 1972, astronauts landed on the moon six times, and when those Apollo missions returned home, they brought 842 pounds of moon rock and dust with them.

While NASA immediately got to work studying many of the 2,200 separate samples collected during the missions, it wisely put some of them directly into storage without opening the containers.

“The agency knew science and technology would evolve and allow scientists to study the material in new ways to address new questions in the future,” said Lori Glaze, director of NASA’s Planetary Science Division.

What’s new? NASA hopes to return astronauts to the moon by 2025 through its Artemis program, and to prepare for that mission, it’s opening one of the last unstudied samples of moon rock collected during the Apollo era — and it’s a special one.

During the Apollo 17 mission, astronauts Eugene Cernan and Harrison “Jack” Schmitt collected moon rock and soil from a lunar landslide deposit in a 1.5-by-14-inch tube. NASA astronauts then vacuum sealed the tube while still on the moon.

Only two samples were vacuum sealed prior to the return to Earth, and both have been stored in a larger vacuum-sealed and atmosphere-controlled environment ever since. This is the first to be opened.

“A lot of people are getting excited,” Ryan Zeigler, Apollo sample curator, said. “University of New Mexico’s Chip Shearer proposed the project over a decade ago, and for the past three years, we’ve had two great teams developing the unique equipment to make it possible.”

Looking ahead: NASA cracked open the outer vacuum tube on February 11, and the gas that was released was exactly what they expected to find. That suggested that the seal of the inner tube — the one containing the sample — was still intact.

On February 23, they started the weeks-long process of releasing and collecting the gas from that inner tube for analysis. They aim to remove the moon rock and soil from it before the summer and hope to glean insights that will help the Artemis astronauts collect their own sealed samples.

“This is an exciting learning opportunity to understand the tools needed for collecting and transporting these samples, for analyzing them, and for storing them on Earth for future generations of scientists,” Thomas Zurbuchen, NASA’s associate administrator for science, said. 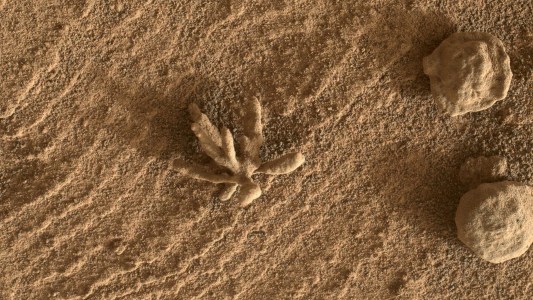 Curiosity has discovered a Martian rock shaped like a flower, and it’s helping NASA scientists unravel the history of water on Mars.