A rocket technology championed by NASA more than 50 years ago could be the future of space travel.

It’s called nuclear thermal propulsion (NTP), and it has the potential to dramatically reduce travel times to distant destinations, while increasing launch flexibility and making spaceflight safer for astronauts.

It could also make satellites less vulnerable to enemy attacks — and the US plans to demonstrate it in space by 2026.

Rocket propulsion is based on thrust, and the easiest way to understand that is to think about releasing the nozzle of a balloon you’ve filled with air — as the air exits the hole, it sends the balloon flying in the opposite direction. Thrust is the force moving the balloon.

Most rocket engines produce thrust by combining fuel (e.g., liquid hydrogen) with an oxidizer (e.g., liquid oxygen) and igniting the mixture. This creates a gas that’s then forced out of the engine’s nozzle, propelling the rocket in the opposite direction.

Chemical rocket engines aren’t the only option, though.

In the 1950s, NASA began exploring NTP systems, which use nuclear fission — the process of splitting atoms apart — to produce the heat needed to convert a liquid propellant into a gas and produce thrust.

These systems aren’t currently being designed to launch spacecraft from the Earth’s surface — a chemical rocket would be used for that — but they have huge benefits for travel in space.

Experts believe they could cut the time it takes a rocket to reach Mars by up to 25% (shaving about two months off the trip), which would reduce astronauts’ exposure to threats such as cosmic radiation, microgravity, and boredom.

Because fuel is so heavy, the only launch window for a crewed chemical rocket trip to Mars is when the Earth and Mars’ orbits are ideally aligned, which only happens once every 26 months.

The efficiency of an NTP system means it would need much less propellant than a chemical rocket to get to Mars, and a volume of uranium barely the size of a marble. Trips could happen even when Earth and Mars weren’t in optimal positions thanks to the powerful engine, which is good news if you can’t wait two years for resupply or rescue.

“Once you would send humans to Mars under a chemical rocket, you would have to wait … until Mars and the Earth are back again in the same spot [to return],” John Horack, the Neil Armstrong Chair in Aerospace Policy at the Ohio State University, told Space Times.

“[An NTP system] will allow you to come and go as you please, so to speak, as opposed to having to wait for the celestial mechanics to line up,” he added.

On an NTP spacecraft, astronauts would have the option to abort a mission to Mars months into the journey instead of just days.

NASA also plans to only equip a crewed chemical rocket with enough fuel to get to Mars. The fuel for the return trip would either have to be sent to the Red Planet in advance or created using resources on Mars.

Most of a chemical rocket’s fuel is used up at the start of the mission, to break free from Earth’s gravity and accelerate to cruising speed.

That means that, within a few days, a Mars-bound spacecraft with a chemical propulsion system wouldn’t have enough fuel to return to Earth if the crew needed to abort the mission. On an NTP spacecraft, astronauts could abort even months into the journey.

NASA’s early research into nuclear propulsion ground to a halt in 1972 due to budget cuts and shifting priorities, but interest in the tech has started to pick up again in recent years.

“​​Today’s advances in materials, testing capabilities, and reactor development are providing impetus for NASA to appraise [NTP] as an attractive 21st century option to propel human exploration missions to Mars and other deep space destinations,” NASA wrote in 2018.

In July 2021, NASA and the DoE awarded three contracts worth approximately $5 million each to US companies to design reactors for NTP systems that could one day be used for crewed missions to Mars or science missions to parts of the outer solar system.

NASA is working with BWX Technologies to develop NTP fuels that use low-enriched uranium instead of highly-enriched uranium, which will cut costs and reduce proliferation risks.

It is also working with DARPA on the DRACO program. That project (the “Demonstration Rocket for Agile Cislunar Operations”) is developing NTP engines for use in space between Earth and the moon.

DARPA is currently soliciting proposals for phases 2 and 3 of the program, with the goal of demonstrating an NTP system in orbit in 2026. If successful, the DRACO engine could one day give US satellites the ability to quickly evade attacks from anti-satellite weapons.

If the DRACO program is able to demonstrate NTP tech in 2026, it might not be long before the satellites we rely on for communications, defense, and more are powered by the systems and better protected against attacks.

However, while shortened flight times would reduce astronauts’ exposure to many space threats, equipping a crewed spacecraft with a nuclear reactor presents its own risks.

“I think it’s going to have to be flown a few times … before somebody sells tickets.”

By launching an NTP spacecraft into space aboard a traditional chemical rocket, NASA minimizes the chance of harming people during liftoff, but the costs and other factors associated with launching a chemical rocket would still apply to the mission.

NASA would also need to design the spacecraft to protect astronauts from the nuclear reactor itself — this could be done by using advanced materials to shield them from radiation or placing living quarters as far from it as possible.

Ultimately, NASA will want to do everything possible to ensure the systems are safe, which means years of research into NTP engines before we see any crewed missions powered by them.

“Nobody’s ever flown nuclear propulsion yet,” Jeff Sheehy, chief engineer of NASA’s Space Technology Mission Directorate, told CNN in 2021. “I think it’s going to have to be flown a few times … before somebody sells tickets.” 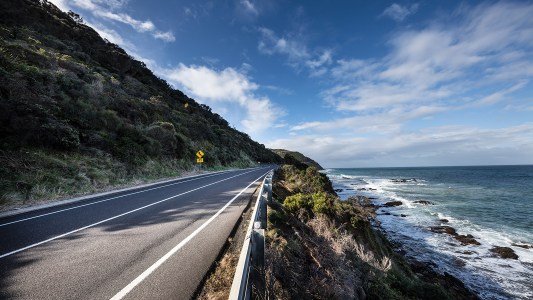 Australian researchers blasted bitumen with a UV machine to discover how used tires can act as road “sunscreen.”

Engineering
Recycled tires can act as sunscreen for roads
Subscribe to Freethink for more great stories
Subscription Center
Sections
Video
Freethink
Subscribe
We focus on solutions: the smartest people, the biggest ideas, and the most ground breaking technology shaping our future.
Subscribe