Magnets might be the key to developing lighter, simpler systems for generating oxygen in space, according to a new international study from the University of Warwick, CU Boulder, and Freie Universität Berlin.​​​

The challenge: Astronauts on the International Space Station (ISS) generate oxygen using two devices: one recovers water from urine, condensation, and humidity, and another uses a process called “electrolysis” to split the water into hydrogen and oxygen.

On Earth, the lighter gasses would float to the top of the heavier water for easy collecting — but on the ISS, liquids and gasses are both essentially weightless. As a result, the bubbles remain suspended in the liquid, and NASA has to use a system of pumps and centrifuges to get them out.

A 2016 study out of NASA’s Ames Research Center concluded that the complicated ISS system wouldn’t be suitable for generating oxygen on Mars — astronauts far away from Earth will need something lighter, more reliable, and easier to maintain.

The idea: The international team of researchers has now demonstrated for the first time that gas bubbles suspended in a liquid can be attracted to or repelled from common magnets in microgravity, which they simulated by dropping their experiment off the Bremen Drop Tower.

“After years of analytical and computational research, being able to use this amazing drop tower in Germany provided concrete proof that this concept will function in the zero-g space environment,” said researcher Hanspeter Schaub.

Multiple options: More research is needed to figure out what a magnet-based system might look like, but other ideas for generating oxygen in space are already further along in development.

The most notable is MOXIE, a toaster-sized experiment on NASA’s Perseverance rover — it’s already demonstrated an ability to extract oxygen molecules from the Red Planet’s carbon dioxide-rich atmosphere.

The ESA, meanwhile, is sending a new instrument to the moon in 2025 to test its ability to pull oxygen from lunar regolith using electrolysis and molten salt — if it works, it could lead to the creation of an oxygen-generating plant on the moon’s surface in the 2030s. 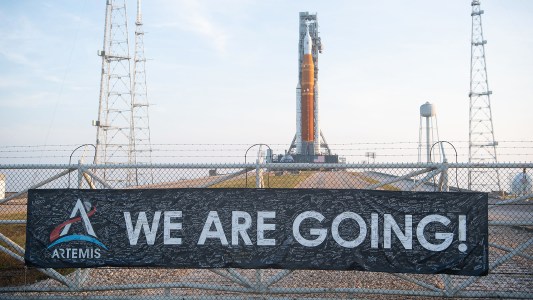 After multiple delays, NASA’s new moon rocket — the Space Launch System — is finally on the launchpad ahead of its first test flight.